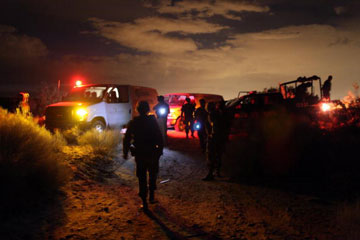 The city of Juarez, Mexico, has been one of the hardest hit by the violence generated by the war between the drug cartels. See pictures of illegal drugs.
Shaul Schwarz/News/Getty Images

Drugs are big business, and in Mexico in particular, the drug economy is having a devastating impact. Narcotics trafficking brings in nearly $40 billion to Mexico annually and the country is the gateway for 95 percent of the cocaine that finds its way to America [source: Department of Justice]. The drug game is so lucrative that in 2009, Forbes put narco kingpin Joaquin Guzman, head of the Sinaloa cartel, on its annual list of The World's Billionaires [source: Forbes]. The magazine also placed him at No.41 in its ranking of The World's Most Powerful People [source: Forbes].

In 2006, Mexico elected Felipe Calderón president, and he responded to the increasing drug-related activity in his country by launching a full-scale assault on the country’s drug cartels. Nearly five years into his term, the fight rages on. The cartels, the criminal organizations that control the production, trafficking and enforcement of the drug trade are considered the most powerful organized crime syndicate in the Western world [source: Beith].

Since Calderón took on the cartels, more than 34,000 lives have been claimed, more than the wars in Iraq and Afghanistan combined [sources: Ellingwood, Department of Defense]. As the war on drugs escalates south of the border, the methods each side is using are also becoming more sophisticated. For example, the U.S. government has enlisted unmanned aircraft, or drones, for high-altitude surveillance of Mexican cartel strongholds.

But this is still predominantly a ground war, and one of the emerging methods for transporting and protecting narcotics in this contentious and violent battle is a narco tank. Narco tanks, sometimes called 'los monstruos' (the monsters) by locals, are highly armored, heavily armed vehicles designed to withstand and dish out loads of punishment.

In this article, we'll explore how narco tanks are being used, how they're created and what their presence means for law enforcement. So, what does it take to create one of these road warriors? Keep reading to find out (but don't try this at home).

Anatomy of a Narco Tank 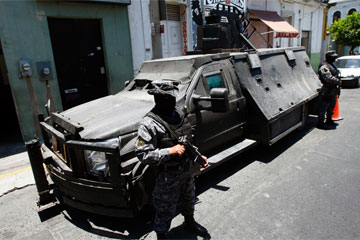 So-called narco tanks are heavily armored vehicles that have been showing up frequently in Mexico in recent days.
Hector Guerrero/AFP/Getty Images

Narco tanks are constructed to do two things: protect their cargo and take a beating. To this end, the drug organizations building these monsters have shown a great deal of imagination when it comes to their creations. Mexican authorities recently seized two of these vehicles, which demonstrate the frightening resolve of the cartels.

"El Monstruo 2011" (The Monster 2011) is the nickname given to one such vehicle. The Mexican army seized the battle-ready armored transport after a firefight with the Los Zetas cartel in early May 2011 [source: Wyler]. The crudely modified three-axel truck was large enough for 12 men and could reach speeds of 68 miles per hour [source: CNN]. It was equipped with slots and turrets for gunmen to fire weapons, including rocket-propelled grenades, from inside [source: Wueger]. El Monstruo 2011 was only disabled because its wheels were left unprotected and struck by gunfire.

Authorities found a second narco tank abandoned in Jalisco, in western Mexico, in late May 2011 [source: Wyler]. This area has seen a lot of bloodshed as rival cartels compete for control since Ignacio "Nacho" Coronel, a high-ranking leader in the Sinaloa Cartel, was killed in 2010. It's unclear which group this truck belonged to. It represents a more ambitious design, having been modified from a 2011 Ford F-Series Super Duty pick-up truck [source: Wyler]. Virtually every surface was covered with steel plates welded in place, and the front was fitted with a steel battering ram fastened to the bumper. Like El Monstruo, this truck had a cargo hold fitted with gun ports for the crew.

These are just two examples of the lengths drug cartels are willing to go to for the illegal drug trade. Similar seizures have yielded tanks that include user-friendly features like air conditioning and special insulation to muffle the sound of incoming gunfire [source: Johnson]. This conflict has seen the deployment of modern (and not-so-modern) technology to aid the cartels, but these tanks leave little doubt that they've been designed with far more violent intentions than simply running drugs.

So, who's using these machines, and how widespread are they? In the next section, we'll look at how these vehicles are affecting local law enforcement and what methods are being used to combat them.

In 1971, President Richard Nixon declared war on drugs but in the 40 years since, the battle has grown far bloodier than anyone could have predicted [source: PBS], In recent years, the violence in Mexico in particular has transformed portions of the country into virtual war zones, and Mexican law enforcement agencies are being overwhelmed. In 2008, U.S. President George Bush signed the three-year Merida Initiative, a $1.6-billion program to equip and train Mexican, Central American and Caribbean authorities in their efforts against the cartels [source: Richter]. But three years later, critics are wondering if Merida has done any good.

Narco tanks represent another level of frustration for officials battling cartels that are already well-funded, highly trained and extremely motivated [source: Richter]. The vehicles can transport large crews of up to a dozen or more heavily armed men, so just their presence can be intimidating. But so far, there do not seem to be any accounts of these vehicles engaging law enforcement [source:Johnson]. Instead, the cartels seem to be releasing these monsters on each other, using them to gain an advantage in their own turf wars.

The emergence of these narco tanks is another escalation point in a war that grows increasingly violent, and serves as a reminder for police officers about what they are up against. Entire communities are terrified of retribution if they cooperate with law enforcement and without the eyes and ears of citizens, authorities are at an even bigger disadvantage [source: NPR).

And there is reason to believe narco tanks may indicate that the drug war is deteriorating into a full-fledged narco-insurgency. In January 2011, a car bomb killed a police officer in only the second such attack in the country's history [source: Ramsey]. This increasing aggression toward law enforcement and political leaders (three Mexican mayors were assassinated in a two-week span earlier this year) has drawn comparisons to the drug-fueled violence that spread throughout Colombia in the '80s and '90s [source: Ramsey].

So what hope does Mexico have for fighting back against cartels so resolute that they've resorted to building tanks in their garages to protect their business? In the next section, we'll take a look at Mexico's long-term outlook for the war on drugs.

By Any Means Necessary

In early 2011, Colombian authorities seized a custom-built narco submarine capable of transporting 8 tons (7.3 metric tons) of cargo from Colombia to the coast of Mexico. Drug runners are flying the friendly skies, too, using ultralights to transport their goods. These small aircraft can move undetected at low altitudes. The pilot simply drops the cargo in an isolated area to be retrieved later [source: Marosi].

Narco Tanks May Be Here to Stay

The United States is the world's most lucrative drug market and the fight to supply it is unrelenting [source: Moore]. In fact, the problem shows signs of getting worse. In June 2011, Mexican officials seized a fleet of much larger narco tanks. Instead of modified pickups, these began life as three-axel equipment trucks with the capacity to transport 20 heavily armed goons [source:Johnson].

But there is hope. With more than a billion dollars from the Merida Initiative still appropriated to arm Mexican law enforcement entities with the equipment and training, the hope is that civilian security forces can assume some of the burden that has fallen to the Mexican military. This redistribution of responsibilities should prevent the military from being stretched thin by having to fight the cartels as well as manage its traditional role of defending the country against external threats [source: U.S. Department of State].

Of course, as long as the U.S. demand for illegal drugs remains high, combating the supply portion of this supply-and-demand cycle will be difficult. To put U.S. consumption into perspective, consider that in 2009 more than 11 percent of the population over 12 years old reported using marijuana [source: Department of Health and Human Services]. That's a lot of dope.

Until the demand for illicit drugs is brought under control, suppliers will do whatever they can to fill that very specialized, very lucrative niche. These hyper-modified vehicles are just one of the symbols emerging from an ugly and protracted fight. With so much at stake, and with law enforcement struggling to manage the trafficking crisis in Mexico, the cartels will likely continue to employ narco tanks and other aggressive methods.