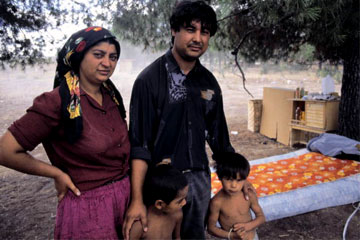 In recent years, a handful of European Union countries have battled a peculiar illegal immigration issue. It's not that side effects like discrimination, prejudice and governmental distrust are unique to toughening immigration practices in Europe, but the targeted minority population might seem out of the ordinary, particularly to people in the United States. The people in question are the 10 to 12 million gypsies scattered around the 27-nation collective, and the immigration -- and subsequent deportation -- controversy is just one of the endless battles the ethnic minority has fought ever since literally fighting its way out of northern India a thousand years ago [source: Castle].

The word "gypsy" often connotes images of fortune tellers, caravans and beggars. Their portrayal in literature, film and popular culture is generally unflattering, depicting the people as roving bands of ne'r do wells who lie, steal and cheat -- and play the violin beautifully. At a distance, gypsies are perceived as exotic, while nearby, they're often deemed a nuisance [source: Sigona]. Hemingway's "For Whom the Bell Tolls" contains many passages of anti-gypsy vitriol, with the author writing at one point, "The gypsy…is truly worthless, no political development, nor any discipline, and you could not rely on him for anything" [source: Hemingway].

Partially for that reason, they've been kicked around the Asian and European continents, with some hopping over the Atlantic to settle in the United States. Especially in Europe, poor health, low economic status and faltering educational achievement have followed them along the way, causing the gypsies to be perceived as undesirable candidates for nations to accept with open arms. Many fled Bulgaria and Hungary to wealthier E.U. countries seeking better opportunities, but their visas only allow them stick around member nations for three months at a time, after which they're forced to either continue their nomadic lifestyle or remain illegally [source: Garcia]. Anti-gypsyism is prevalent enough that certain governments have even referred to this immigration issue as the "gypsy problem" [source: Sigona]. And though the E.U. officially forged a plan to assist the large minority in April 2011, people in Italy and France have been destroying gypsy camps and kicking out their residents in the meantime [source: Garcia].

A swirl of confusion about who these people truly are still abounds, fueling the xenophobia and hostility often directed toward them. Even the term "gypsy" is an enduring misnomer, derived from the mistaken notion that they emigrated to Europe from Egypt [source: Goldston]. Today, gypsies are officially referred to as the Roma, tipping the hat toward their foster home of Romania. So is Romania really where the Roma originated? Not by a geographical long shot. For centuries, no one knew the origins of this mysterious people, not even the Roma themselves.