The Facts of Roma Life: Health, Education and Exile 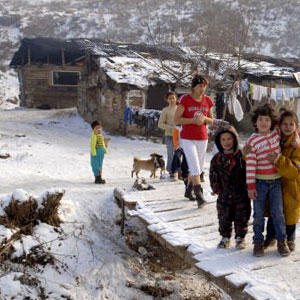 Many gypsies live in poverty, and a majority of children are illiterate.
Getty Images

Life is hard for the Roma, and not solely because they're cast as societal outsiders. The gypsy lifestyle, which is typically poverty level, can take a toll on their health and education. Complicating matters, these two factors also perpetuate the Roma's vagabond tradition, since no village, town or country seems to want gypsies, who are perceived as being potentially sick and illiterate, roaming their streets.

Compared to the general population in Bulgaria, Slovakia, Ireland and Czech Republic, the Roma die roughly six to 10 years earlier [source: Horton]. Infant mortality rates are also double and triple those of the surrounding ethnic groups [source: Horton]. Medical researchers haven't identified the root of these longevity gaps, but poverty, meager nutrition and lack of medical access are certainly contributing factors. Gypsy clans may also resist medical treatment in favor of their own homeopathic remedies. As a result, however, treatable illnesses such as tuberculosis have been thought of as fatal among many Roma [source: Horton].

Primary and secondary education are also major obstacles for the Roma. Illiteracy runs rampant in Roma community, with up to 75 percent of gypsy girls unable to read [source: Fonseca]. This de-emphasis on learning goes along with the constant travel and varying Romani language, but even for settled gypsy communities, schooling is rarely a priority. Rarely will gypsy teens complete high school [source: Fonseca].

Suffering from poor health and unable to read, many Roma clans have become embroiled in generational cycles of poverty. Those issues, along with criminal activity and violence associated with gypsy groups, have provoked immigration crackdowns and restrictive visa policies for the Roma in the European Union [source: Garcia]. At the same time, a minority among this minority -- Romani activists -- have started jostling for rights and improved quality of life for their people.

Learning to speak perfect Romani, the language of the Roma people, is practically impossible. Vocabulary and dialect shifts from tribe to tribe, which means you might be able to carry on a flawless conversation with Roma living in Albania and still find yourself tongue tied among those in, say, the United States. Nevertheless, here are some common Roma words (spellings may vary): “Kumparin” means family caravan; “Gadje” refers to Non-Roma outsiders; “Puyuria” indicates outsiders who adopt the Roma way of life; “Dat” means father; “Romni” means mother; and “Daj” is the word for child.