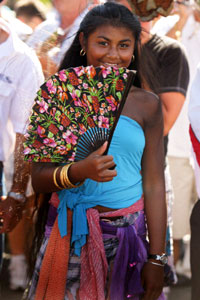 A Romani girl at an annual gypsy pilgrimage in France.
Patrick Aventurier/Getty Images

Gypsy expert and author Isabel Fonseca once wrote that the Roma "have no heroes…no myths of origin, of a great liberation, of the founding of a 'nation,' of a promised land" [source: Fonseca]. Nevertheless, since the 1970s, there has been a stirring among the Roma for identity and validity, and while they have since achieved official recognition as a discrete ethnic group, the sprawling gypsy diaspora remains restless against governmental and societal establishments.

Years of persecution have highlighted the dismal truth that lacking an ethnic identity and homeland has its disadvantages. At the same time, gypsies would be wrong to attribute all of their misfortune to the wrongdoing of others. Time and again, the wayward actions of some Romani, such as stealing from neighboring gardens and pillaging for scraps, have reinforced the negative stereotyping [source: Fonseca]. As long as that type of tension continues, Roma will likely have a hard time putting down roots, as plenty desire to do despite their nomadic natures. Aside from Romania, which offers the most generous support system for the beleaguered people, a majority of European Union nations prefer to keep their gates closed. Rather than allow gypsies to stay put, they are continually told to continue wandering.

Romani activists nevertheless have made some positive steps toward improving the perception of gypsies. With support from the Indian government, the first World Romani Congress was convened in 1971. Attended by gypsies from 14 countries, who chose a flag and an anthem, the Congress was an uncommonly unified gathering that's characteristic of modern Romani movements for tribal aid and minority rights. Since the Romani Congress had the backing of a legitimate, recognized country, it provided a stepping stone for the United Nations to officially recognize the Roma as an official ethnic group in 1978 [source: Fonseca].

Although cultural assimilation might be the one-way street toward Roma peacefully integrating into mainstream society after nearly 1,000 years of resistance, it does come at a price. Their language of Romani, which shape shifts across longitudinal lines, has already shown signs of wear and tear. The more successfully Roma mix and mingle among local communities, the more their Romani speech has diminished. Communism also discouraged Eastern European gypsies from speaking Romani, and as a result, possibly half of Romanian Roma have lost their iconic language [source: Godwin]. For that reason, some Roma activists have argued for systematizing Romani to help ensure its long-term survival.

With or without increased settlement assistance from the European Union, gypsies aren't in danger of disappearing anytime soon. An estimated 8 to 10 million live on the continent, making it one of Europe's largest and fastest-growing minorities [source: Hancock]. Gypsies in the United States have arguably fared better than their counterparts across the Atlantic, yet the Roma are still concentrated in the Balkans where they first arrived after being released from military captivity by the Seljuks in Turkey. It might seem illogical to stick close to the site of their most violent oppression, but gypsies tend to defy non-gypsy gadje convention. And why? Because they're Roma, and they always have.