The Roma Way of Life: Gypsy Work and Family Life 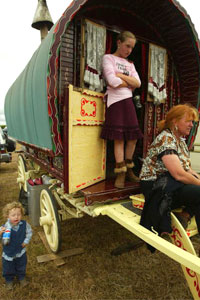 Perhaps more than any other ethnic group on the globe, gypsies have been equally romanticized as wandering free spirits, unhinged from the monotony of mainstream society, and demonized as societal eyesores who lie, cheat and steal. But the Roma reality exists at neither of these extremes.

Sociologically, the Roma qualify as a middlemen minority, which contributes to their ambiguous identity and precarious relationships with other ethnic groups [source: Fonseca]. Their nomadic tendencies cause the gypsies to be ranked among the minority wherever they reside, ethnically isolated and communally disconnected. And while gypsies have been known for their primary trades of metallurgy, music and animal husbandry, they haven't earned respect for it due to racism -- a similar discrimination that experienced by Jewish and black minorities [source: Fonseca]. During their 400-year enslavement in modern-day Romania, different groups of Roma were defined by their job duties, some of which have persisted among slave descendants for generations. For example, one copper-making clan now specializes in scrap metal [source: National Geographic].

At the same time, the gypsies also leveraged their outsider status to their advantage as entertainers. Perhaps best known for their musical talent, traveling gypsies could attract audiences by portraying themselves as exotic people from Egypt or elsewhere. Dressing themselves in bright clothing and practicing fortunetelling, the Roma quickly attracted the ire of the Roman Catholic Church, but also the allure of the forbidden.

To earn a living today, gypsies might weave furniture, make bricks, resell clothing and goods, or trade horses, but employment is typically a side note in their existence. Sources repeatedly underscore the difficulty that the Roma have in obtaining regular work because employers often don't want to hire them. Even in Eastern European countries where the communist regime allocated factory jobs for gypsies, their employment evaporated first after the iron curtain fell in 1989 [source: Godwin]. Indeed, many European gypsies subsist on begging and neighbors repeatedly complain of stealing. While those accusations may be overblown, even Roma will warn outsiders not to trust other Roma [source: Godwin].

After centuries of persecution and enslavement, Roma are understandably hesitant to open their homes to non-Roma , or gadje, and penetrating gypsy culture in general is a tall order. The families band together in clan systems, cordoned off from mainstream society. The familial structure is often strictly paternalistic, with women tending to home and children, while men may or may not work. Arranged marriage among adolescent brides and grooms remains common. In the United States, gypsy families may still practice arranged marriage in order to preserve the Roma ethnicity [source: Godwin]. Daughters and daughters-in-law, sometimes as young as 12 years old, complete arduous housework, cleaning and cooking under the watchful eye of the mother and grandmother. The men, meanwhile, may or may not work, but they're nevertheless responsible for maintaining gypsy clan order (village leaders are called bulibashas) and assembling tribunals to settle any disputes [source: Fonseca].

While the gypsies can be lauded for remaining fiercely independent and protective of their unique culture, that isolation has also reaped certain negative consequences. Unstable employment, teen marriage and rigid gender roles might be hallmarks of the Roma way, but they're also Roma risk factors.

A Roma by Any Other Name…

The Roma are probably best known by the misnomer "gypsy," which Romani activists consider a derogatory term. But that isn't the only incorrect term applied to the ethnicity around the world. In Spain, locals refer to the Roma as “Gitanos,” while in England and Ireland they’re known as “Travelers.” Germans and Italians, on the other hand, use the term “Sinto.”