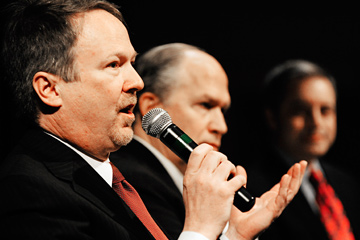 In all states, the governor is elected by the people in a statewide election. Once a governor's term has expired, he or she has to run for re-election, and will sometimes face opponents from his or her own party. That election is called a primary. Voters across the state typically register with one party or another then cast their vote for the candidate who will run as a Republican, Democrat or an Independent.

The winner of that primary will go on to face the primary winner from other parties in the general election. In some states, the lieutenant governor runs on the same ticket as the governor -- much like the president and vice president do -- but in others, they run separately.

People from all backgrounds can choose to run for governor, but the strongest contenders are usually those with previous political experience. In the recent governor's race primary in Texas, the candidates included the current governor, a U.S. senator and the former mayor of Houston.

Candidates travel all over the state to spread their message, speak to voters and raise campaign money. Many private citizens also run, but since the costs to run a campaign are so high, it's usually reserved for people with lots of money and connections. Just as an example, in 2018, the cost of running the California governor's race topped $67 million [source: LA Times].

Now let's look at how a governor's office is organized, and how they're able to get the job done.