What's the best way to find a four-leaf clover? 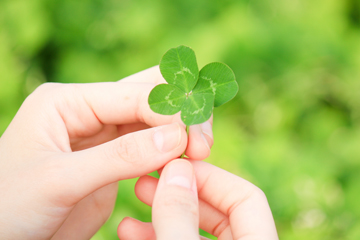 How exactly can you get your hands on one of them?
BENNY-K/Thinkstock

You're out for a stroll and spot a patch of clover. As you scan the plants, you notice one that's a little different. Instead of three leaves, this one has four -- it's a lucky four-leaf clover!

A four-leaf clover, according to superstition, is a lucky charm that can ward off evil, help you meet a future love, lend you good fortune and allow you to see fairies. Its individual leaves are believed to represent faith, hope, love and luck. With all this goodness packed into one tiny little plant, it's high time you figured out how to find more, right?

First, you'll need to know the species for which to search. The four-leaf clover sprouts from the Trifolium repens plant, commonly known as the white clover. And those four leaves? They aren't actually separate at all, but leaflets, four parts of a single leaf. One part of the leaflet is always smaller than the other three.

So how can you increase your odds of finding a four-leaf clover? Let's crunch some numbers and find out. In general, a patch of clover will produce a four-leaf clover at a rate of one in 10,000. And, because a typical clover stand contains 10,000 plants in nearly 13 square feet (1.2 square meters), usually you'll need to scan an area about the size of an office desk to find a four-leaf clover [source: Olson].

But don't plan to count each leaf in the entire clover patch. That would take a really long time. Instead, take a more passive approach by moving your eyes over the patch and waiting for an abnormality to catch your eye. While this may not seem like it would be more effective than intently looking at each leaf, studies show that it is. In one study, radiologists were shown mammograms for one-fifth of a second and then asked which one showed a tumor. While they weren't actually given enough time to completely scan each image, they often were still able to identify which mammogram was different [source: Olson].

If you've been wondering how a four-leaf clover occurs, thank researchers at the University of Georgia. In 2010, they discovered the gene responsible for producing four-leaf clovers. It's located in a specific region of the white clover genome, and it's believed that crossbreeding four-leaf clovers could result in offspring that consistently produce a quadruple leaflet [source: Shearer].

The world record for what could be considered the luckiest clover ever is held by Shigeo Obara of Iwate, Japan. On May 10, 2009, Obara discovered a clover with 56 leaflets. The jury is still out on whether the clover has been 14 times as lucky as a run-of-the-mill four-leaf clover [source: Guinness World Records].