Why do people knock on wood for luck? 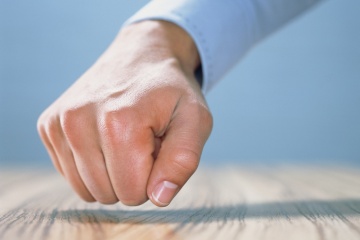 Like many superstitious rituals, knocking on wood for continued good luck has roots in lore and myth.
© Michael Haegele/Corbis

When you speak of your own good fortune or the good fortune of someone close to you, you might unconsciously rap your knuckles on the nearest table or piece of wood. For some of us, this behavior is so ingrained that we forget why we're even doing it. And sometimes we'll just say "knock wood" without even bothering to rap on anything. But why does knocking on wood have anything to do with luck?

We perform rituals (or avoidant behaviors) in the hope that they'll help us avoid or reverse a jinx. In a 2013 University of Chicago study, researchers found a pattern in their subjects' behavior. After tempting fate by saying things like "I'll never have a car accident," each subject either knocked wood, threw a ball (which has no attached superstition) or held onto the ball and did nothing. The researchers found that the subjects who performed an action (rather than simply holding onto the ball) felt they avoided bad luck [source: Sifferlin].

So knocking is an action that supposedly helps us have good luck. But why don't we knock on metal? Or plaster? The answer may go back to pagan rituals.

Pagans believed that trees housed fairies, spirits and other mystical creatures. The Celts especially believed trees were powerful and magical and that interacting with them provided direct contact with the spirits within. Trees played an integral part in rituals: Pagans often used trees in human sacrifice, and they chose a sacred tree within the village whose clippings would be used to ward off evil spirits. Planting certain types of trees around homes was thought to invite good spirits to protect the families inside.

Knocking or touching a tree was a way of requesting good luck from the benevolent spirits residing within and distracting any of the evil ones. A second knock was a way of saying "thank you." Christians adapted this ritual to associate knocking on wood with the wood of the cross — thus seeking the protection of God. Brits tend to say "touch wood," but the meaning is the same. It became a symbol of good fortune around 1850 after a mention in Notes and Queries magazine [source: Phrase Finder].