Why are horseshoes considered to be lucky? 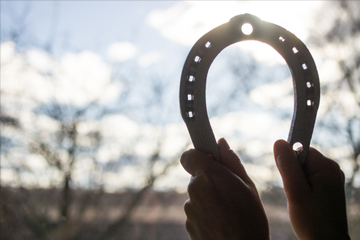 Horseshoes are thought to bring good luck and protection.
Tadas_Zvinklys/ThinkStock

Four-leaf clovers, rabbit's feet, heads-up pennies — all lucky charms for many people. Another common lucky charm? The horseshoe. Often seen hanging over the entrance of a home, given to a newlywed couple, or, more recently, worn as jewelry, horseshoes are thought to bring good luck and protection. Over the centuries, several origin stories emerged about why people the world over believe in the luck of the humble horseshoe.

In the Irish story of the blacksmith and the devil, one day a blacksmith was working hard in his shop forging horseshoes. Suddenly, the devil appeared and demanded his own shoes. The blacksmith, recognizing the devil, took a burning hot shoe and nailed it deep into the devil's hooves. After walking away, the devil was in such excruciating pain, he ripped the horseshoes off and swore he would never go near one again. Thus, the tradition of hanging a horseshoe over the entrance of a house to ward off evil spirits was born.

Another story has more to do with the metal in the horseshoes. Early Western Europeans believed that iron had magical powers. Iron could drive away evil, and folklore of the time told of many malevolent fairies and mystical creatures. Since horseshoes were made of iron, they kept the badly behaving fairies away. Other legends said that witches were so afraid of iron horseshoes, they traveled on broomsticks instead of on horseback. Yet another states that 8th-century Chaldeans believed the crescent shape of the horseshoe protected against the evil eye, thus making it a good luck charm [source: Kentucky Derby Museum].

Even the number of holes in a horseshoe is lucky. Horseshoes have seven holes to hold them in place on the horse's foot. Many cultures consider seven a lucky number, as it appears so frequently in our world — seven continents, seven colors in the rainbow, seven seas, seven days in the week ... you get the point.

There does seem to be some contention, however, over how to hang a horseshoe. Some say you should hang it heels up, like the letter "u." Others say you should hang it heels down. Hanging a horseshoe heels up means it keeps all the good luck from running out of the shoe. But hanging a horseshoe heels down means it flows good luck down on everyone who walks underneath it. It's personal preference, but maybe it wouldn't hurt to have two, and hang one each way!