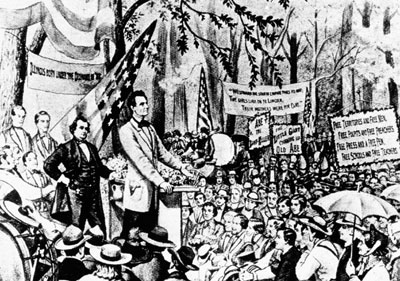 An illustration of the historic senatorial debate between Stephen Douglas and Abraham Lincoln in 1858.
Hulton Archive/Getty Images

First, a bit of history on presidential debates. In the United States, they were actually born out of a well-publicized Illinois senatorial debate between Abraham Lincoln and Stephen Douglas in 1858. This debate, with no moderator or panel, was the result of Lincoln following Douglas on his campaign trail around the state, goading him from the audience during campaign speeches. The pair eventually took the stage together for three hours to debate the moral and economic quandaries posed by slavery. The effects of their senatorial debate (Douglas won the seat) wouldn't be seen immediately: Lincoln didn't debate at all during his successful campaign for president two years later in 1860 [source: CNN].

All remained quiet on the debate front; 15 election cycles passed without much public argument between candidates -- the dialogue was separate, usually in the form of campaign speeches. In 1948, the presidential debate would get a boost with a radio broadcast of a debate between Republican primary contenders Thomas Dewey and Harold Stassen. Between 40 and 80 million listeners tuned into the radio broadcast of the pair's debate over outlawing communism in the United States. Still, debates didn't really catch on. Even after the first televised debate (featuring all of the potential candidates), hosted by the League of Women Voters (LWV), an organization that would play an enormous role in shaping presidential debates in the United States, in 1952, debates still remained peripheral to the process of selecting a president.

Once the Kennedy-Nixon series were held, though, the concept of presidential debates took off like a rocket. The public began to expect debate between candidates; debates became an American institution. With all of the weight debates now carried, they could also be construed as lightning in a bottle. To Nixon and other candidates who followed, the bottle had to be safely capped. Lyndon Johnson turned down requests to debate in 1964, as did Nixon in the 1968 campaign. Once elected, Nixon used his presidential veto power to override a bill that repealed the equal time provision of the Communications Act of 1934.

This law required that candidates in national elections must have equal exposure in the media. During the 20th century, candidates used the equal time provision to their advantage. By refusing to debate, any candidate could effectively cripple a proposed debate. Certainly, there was a measure of bad press associated with turning down an invitation to debate. But bad press is better than bad television exposure any day of the week, as the Nixon showing in 1960 had taught. Furthermore, exploiting the equal time provision became a tool favored by front-runners in an election cycle. Bad press from a refusal to debate is far outweighed by the potential harm provided by debating a rival candidate who may have a good showing and possibly sway millions of voters.

Exploiting debates and the debate process looked like it might get out of hand in the 1960s and '70s, until the LWV stepped in to take the reigns of the political process away from campaign strategists. The organization would have a renewed positive impact on presidential races for eight years. In 1988, the Commission on Presidential Debates (CPD) took over and became the only organization capable of legitimately hosting presidential debates. Other debates, held before the candidates are nominated at the conventions, are hosted by news agencies and television networks and aren't official presidential debates. The CPD oversees height requirements for podiums, room temperature at debate halls, chooses moderators and serves as a propaganda arm for both the Republican and Democratic parties. The creation of the CPD ultimately tolled the death of spontaneity in presidential debates.