by Matt Cunningham
Prev NEXT
3

The Rise of the Sitcom 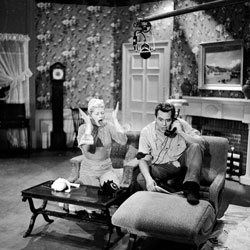 Lucille Ball and Desi Arnaz on the set of their hit show "I Love Lucy," one of the first sitcoms to be beloved by generations of viewers.
Earl Leaf/Michael Ochs Archives/Getty Images

One of the most powerful trends in the development of television has been the evolution of the situation comedy, or sitcom. These popular serial shows have captivated viewers since before the advent of color TV.

Early sitcoms shared some of the features that still mark modern ones. A recurring cast of characters -- often a family, group of friends or coworkers -- encounter different situations each week, with their relationships providing fodder for either comedic or dramatic moments.

From early sitcoms like "The Honeymooners" and "I Love Lucy" to modern, long-running sitcoms such as "Friends" and "Seinfeld," the shows have connected with viewers on a deep level. Over time, viewers form emotional relationships with the characters that mimic real-life friendships. Consequently, viewers of popular sitcoms begin to fit their schedules around the shows, much as they might do for regular get-togethers with friends.

When a popular sitcom ends, the grand finale of the series can draw record-breaking numbers of viewers. The 1983 finale of the sitcom "M.A.S.H." drew 105.9 million viewers, a record that has yet to be broken by any TV show. That level of dedication to sitcoms makes them a darling of advertisers, who continue to support the genre more than 50 years after its origination [source: TV Squad].