How has the evolution of TV changed America? 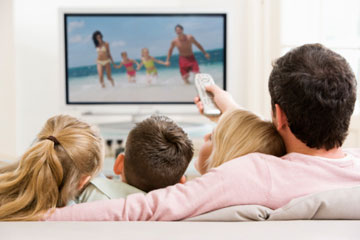 TVs have evolved a lot over the years -- but how have Americans been affected by this? See more pictures of TV's evolution.
BananaStock/Thinkstock

A modern TV viewer would probably see little resemblance between the earliest television advertisements and the modern TV environment. From flat-screen HDTVs to small, flip-open screens, TV viewing has become part of everyday life, far removed from the luxurious event that watching television was in its earliest days. TV -- and the way we view it -- has come a long way from the days of small, black-and-white sets.

That evolution has changed more than just technology, programming or the way we watch, however; our culture has been drastically altered by the glowing sets in our living rooms and dens. For better or worse, America has changed in ways that it might not otherwise have, thanks to our widespread adoption of TV.

The early days of America's relationship with TV were much like the start of a love affair. Television was a new, expensive luxury in the 1940s, and set producers advertised their wares with images of parties and people clustered around the tiny black-and-white screens. Television was something to prepare for, and watching it was often an event that the new TV owner invited his friends over to enjoy.

As TVs became more affordable and appeared in more homes, that image shifted: Instead of the host showing off his set to the neighbors, we now saw happy families gathered around the warm glow of the TV. An entire generation of Baby Boomers grew up with memories of their families replicating this scene, especially as the TV picture bloomed into color with family-themed programming such as Disney's "Wonderful World of Color" [source: Baird].

Next, we'll take a look at some of TV's influences on both the job market and society as a whole.

The Evolution of Television Programming

As the nation became accustomed to getting its news and entertainment from television broadcasts, an industry bloomed that continues to support countless production workers. Small, local news TV stations, major broadcasters, and a sea of technicians, creative specialists and advertising professionals were hired to meet viewers' demands for more and better content. And as technology evolved, that content included live programming, on-site breaking news and international broadcasts. These brought the world into American homes, keeping viewers updated on breaking news from both down the street and across the globe. One could argue that America is more aware of its role in the global scene thanks to television [source: Mair].

But not every change brought on by mass adoption of TV has been a positive one. According to some sources, a modern child in a TV-equipped household will witness almost 1 million acts of violence before age 18, thanks to the seemingly endless stream of police dramas, action films and war movies that play across the screen. Likewise, some sociologists argue that increasing rates of eating disorders and body-image problems among young women -- and increasingly, men -- owe their origin to inaccurate portrayals of sex, beauty and relationships on television. Broadcasters and program producers argue that they simply create content that meets viewers' demands, regardless of the moral or societal implications. But that debate has raged for decades and shows no sign of slowing any time soon [source: Rushdie].

Television is a pervasive medium. Whether at home or in public, Americans encounter television screens and broadcast images in nearly every setting. Generations have grown up accustomed to getting information from TV, to the point where a small message, a politician's on-camera gaffe or a catchy jingle quickly becomes part of the national conversation. Whether this is a good thing or bad for America is a hot topic for debate. But both sides can agree: TV has brought massive change to the collective face, mind and heart of the nation.