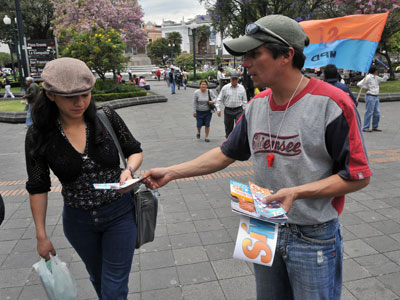 A man distributes leaflets of propaganda in Quito, Ecuador, to promote a constitutional referendum that will allow Pres. Rafael Correa to be re-elected.
Rodrigo Buendia/AFP/Getty Images

We're bombarded with persuasive messages on a nearly constant basis, sometimes by paid advertisers and other times by groups looking to forward their own interests. The entities behind these messages all have the same idea in mind: Convince the audience to agree with the message presented and adopt it as their own belief, thus rejecting the viewpoints of the "other" side. Often, these messages are referred to as propaganda, a term used commonly to describe deceptive persuasive techniques. Historically, however, true propaganda hasn't been full of outright lies or deception, as many people believe. Rather, it's the statement of facts and beliefs with the intention of influencing a particular audience, trademarked by the omission of any details that might persuade the audience to the other side.

Of course, there are many people who believe that a failure to mention important details is as bad as an outright lie. And there are probably just as many who champion the other side -- those who argue that an informed public should research both sides of the story, instead of taking one side's word as the truth. According to M. Lane Bruner, Ph.D., Associate Professor of Rhetoric and Politics in the Department of Communication at Georgia State University, the lines are fuzzy when distinguishing between propaganda and persuasive communications. He explains that persuasion is ethical only if the audience's best interests are being held in mind [source: Bruner interview].

Propaganda has been around for many centuries, although the term itself wasn't coined until Pope Gregory XV established the Congregation of Propaganda in 1622. The pope created this group for the express purpose of trying to win back Catholics who'd taken up the Protestant faith during the Reformation. Missionary work was nothing new, of course, but people began to realize the possibilities associated with "spreading the word." The technique became widely used not only for religious conversions but also for political and wartime public persuasion purposes.

Today, propaganda is used by many people and organizations, including special interest groups (such as anti-smoking groups and safe-driving campaigns), businesses, political groups, government organizations, political candidates and so on. Typically, these groups communicate propaganda through a variety of mediums, including posters, television and radio broadcasts, and brochures. The Internet has also made it much easier for special interest groups to get their messages out to the masses on a worldwide scale.

What are the various ways propaganda is used, and how is it communicated? How do propaganda artists communicate their messages -- and how can an untrained eye or ear spot propaganda?