What was the first televised sporting event? 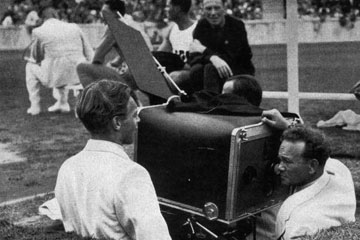 Image Gallery: Evolution of TV A camera crew films athletes at the 1936 Olympics in Berlin, the first sporting event to be shown on television. See more pictures of TV's evolution.
Hulton Archive/Getty Images

You might picture decades of radio-bound sports broadcasting -- the '30s stereotype of kids sitting cross-legged in front of a 3-foot-tall radio that let them listen to the Yankees game right after Little Orphan Annie. But in reality, there were only 18 years between the first radio broadcast and the first TV broadcast of a live sporting event.

Radio took off in 1921 when the station KDKA in Pittsburgh started broadcasting boxing (Johnny Dundee versus Johnny Ray), followed soon by baseball (the Pirates versus the Phillies) and, not much later, college football (the University of Pittsburgh versus West Virginia).

But that's beside the point. You know about the Cold War race to space (USSR 1; USA 0), but did you know about the 1930s race to sports television? The world's first televised sporting event was the 1936 Berlin Olympics. Seventy-two hours of live Olympics coverage went to viewing booths called "Public Television Offices" in Berlin and Potsdam (Germany 1; USA 0) [source: TV History]. Still, like the USSR beating the USA to space but Americans being first to golf on the moon, while German television beat the U.S. to the punch, the first broadcast showed American Jesse Owens winning the 100-meter final. In the context of world history, this was a nice consolation prize for a number of reasons, not the least of which was African-American Owens' triumph in light of the Nazi claim of Aryan dominance.

The United States followed with its own TV broadcast in 1939, when NBC showed a baseball game between Columbia and Princeton -- Lions and Tigers, oh my! But sports got squeezed into weekend spots until 1958, when NBC broadcast the first NFL Championship between the Baltimore Colts and the New York Giants, which the Colts won in overtime.

For more television articles, check out the links on the next page.