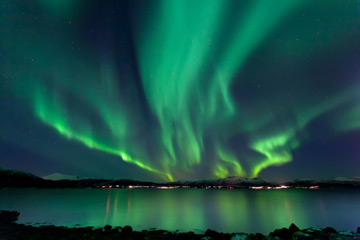 According to Viking legends, aurora borealis (the northern lights) were reflections from the armor of valkyries, the goddesses who chose which warriors would die in battle.
©iStockphoto.com/ArildHeitmann

When you think of vacation destinations, Norway's icy crags and well-below-freezing temperatures might not come to mind. But what if we mentioned world-class skiing, breathtaking scenery and Christmas traditions that insist on seven kinds of cookies? In this article, we'll explore the rich cultural side of Norway that the weather reports don't tell you about.

However, there's no getting around it: Norway gets cold. It's located at the northern border of Europe, and while summer temperatures reach 77 to 86 degrees Fahrenheit (25 to 30 degrees Celsius) in the summer, they can dip to negative 40 degrees Fahrenheit and Celsius in the winter [source: Innovation Norway]. Yes, that's as cold as it sounds. A portion of the country is located within the Arctic Circle, and Norway was virtually uninhabitable until after the last ice age. Combined with its relative isolation, it's easy to see why would-be visitors may have hesitated to put Norway on their itineraries.

If you lived circa 800, the Vikings also didn't help. The Vikings were a warlike civilization known for their long, low boats and brutal attacks on surrounding European populations -- primarily the British Isles, but no coastal region from Spain to Baghdad was safe [source: Kagda]. Their families back home benefited from the slaves and valuable goods that these pirates brought from their raids -- enough to form a significant middle class [source: Lonely Planet. While the modern world might remember the Vikings for their brutality, they weren't all warriors, and many Norwegians believe that history calls for a more balanced view of the group [source: Kagda].

If you're thinking that Viking ancestry, years of relative isolation and a survival-of-the-fittest climate probably adds up to a strongly individualized set of traditions, you'd be right. Let's take a look at how some of those traditions keep Norwegians fed.

Norway's climate and location inform its culinary choices to a great extent -- there are no piña coladas here, but plenty of meats and seafood with distinctive preparations that originally kept them preserved over long winters. The country's ample coastline also make fish a popular dining staple; one particular delicacy is boiled cod, which is commonly eaten on Christmas and is served with boiled potatoes. In fact, most meals in Norway (but especially traditional ones) include boiled potatoes.

When it comes to red meat, reindeer is a popular option -- especially covered with lingonberries, which look almost exactly like cranberries but aren't quite as eye-scrunchingly tart. Norwegians also warm up with the national dish, faari-i-kaal, which is a peppery mutton stew served -- surprise! -- with boiled potatoes [source: Frommers]. Another common Norwegian food is gjetost (also spelled geitost), a kind of goat cheese that's produced when whey curds are cooked down to a smooth, spreadable cheese. Slightly sweet with a hint of caramel, it's often spread on thin, crisp rye crackers -- another Norwegian specialty [source: Fankhauser].

Alcohol is strictly regulated by the Norwegian government, but of-age residents and visitors can enjoy a broad selection of beers, ciders and meads (honey wines). Akevitt (also spelled aquavit), a potato-based, caraway-spiced liquor that was originally matured in casks aboard Viking ships, is another Norwegian specialty. While the legal drinking age is 16, you have to be 18 to purchase alcohol [source: Hanson].

Food is also an important part of Norwegian celebrations, and none more than Christmas. At a Norwegian Christmas feast, you'll have your pick of hearty meat dishes, any number of fish options and a smorgasbord (literally) of sides. Dessert is frequently riskrem (rice pudding mixed with whipped cream) or kransekake (a pyramid-shaped almond ring cake). Norwegian tradition also dictates that every Christmas table should include seven different kinds (called the Seven Sorts) of home-baked cookies for maximum hospitality [source: Innovation Norway]. You may be tempted to book your plane ticket now, but read on to learn more about Norwegian holiday celebrations.

Norway's dining rooms offer as many adventures as its craggy trails and snowy slopes. Be sure to investigate these local delicacies: Medisterkaker, most commonly found around Christmas, is a comfort-food combo of minced pork and flour fried into patties. Lutefisk, a cod-type fish preserved (and slightly jellified) in water and lye before being cooked, is a more adventurous choice, as is pinnekjott, lamb ribs that have been salted and dried -- and are sometimes smoked -- before being steamed. For dessert, you can't go wrong with julemarsipan -- a sweetened almond paste that's often dipped in chocolate [source: Innovation Norway].

Norway was originally a pagan culture, and elements of that culture remain today. Early Norwegians worshipped a pantheon of deities you might have heard of, among them Odin (the chief god) and his son Thor (god of thunder). According to the myths, the gods resided in Asgard, a fortress in the center of the earth, while humans lived in Midgard, the middle section of the earth. High walls protected Midgard from the chaotic outer reaches of the world, which were inhabited by the fierce, troll-like Jotuns [source: Bringsvaerd].

The Viking King Olav II established the Church of Norway in 1024, and today, at least on paper, Norway is predominantly a Christian nation. Around 85 percent of its citizens belong to the state church, now the Evangelical Lutheran Church of Norway, but the religious community also includes other offshoots of Christianity [source: Visiting Arts]. However, many Norwegians don't self-identify as religious.

Holidays like Christmas -- called Jul, the Viking version of Yule -- that combine pre-Christian and Christian traditions are a big deal in Norway. (We suspect that the excuse Jul provides to party in the midst of winters that can last from November through April doesn't hurt its popularity.) The festivities begin on December 1 with Advent, a countdown to Christmas during which children receive a small gift each day -- a tradition echoed in some American families with chocolate-bearing advent calendars.

St. Lucia Day, December 13th, marks the middle of the countdown. Though named for the Roman Catholic saint of the blind (the word "Lucia" comes from the Latin lux, meaning "light"), the holiday is now more secular than religious, and its celebrations bring light to Norwegian communities on what was historically considered the shortest day of the year. On St. Lucia Day, a child from each elementary school or town is chosen to represent the saint. They wear lit crowns and lead processions through the community, singing songs and handing out saffron-flavored buns called lussekatter.

Christmas itself comes early for Norwegians: Children wake up to full stockings on December 24, and families gather to celebrate that evening. It's a busy day, and Norwegian parents take advantage of classic Christmas films like "Tre notter til Askepott" ("Three Hazelnuts for Cinderella," actually a Czech film that's been dubbed in Norwegian) to keep the kids entertained while they whip up Christmas dinner [source: Hollekim Haaland].

In the evening, families open gifts from one another and from Julenissen, the Norwegian version of Santa Claus. Legend has it that Julenissen ("the Yule elf") was a regular fellow who began delivering Christmas gifts and just never stopped. Like the American Santa Claus, he has legions of nimble helpers lending a hand during the pre-Christmas months; however, his lack of magical powers leaves him so exhausted that he sleeps for weeks after the big day [source: Royal Norwegian Embassy].

Norwegians are big on personal holidays, too. We'll talk about birthdays, bunad and more on the next page.

Norse gods still appear in many English-speaking cultures in the form of the names of days of the week. These words originally combined a god's name with dag, or day, as follows: Tuesday: Tyr's dag -- Wednesday: Odin's dag (similar Germanic mythologies use the spelling "Woden," which may be where we got the "w") -- Thursday: Thor's dag -- Friday: Frigg's dag. [source: Bringsvaerd]. 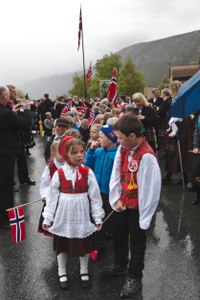