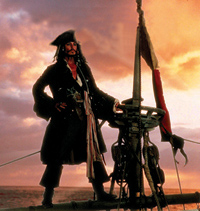 Imagine you're traveling across the ocean by ship. You've had a good voyage, with mild weather and smooth seas. You're standing on the deck, enjoying the breeze on your last night on board.

But suddenly, pirates appear on the deck. They demand money, cargo and access to the captain's safe. They take control of the ship and threaten to maroon you and the crew on a nearby island.

You're not on a Spanish galleon, though, and these pirates aren't in curly wigs and waistcoats. It's the present day, you're on a modern cargo ship and the pirates wear military fatigues and carry machine guns. Your ship becomes one of the hundreds to be attacked by pirates every year.

Being a pirate seems pretty self-explanatory -- pirates use boats to attack other boats with the intent to kidnap, steal or otherwise do harm. But that basic definition doesn't cover it. Violence on the high seas has to meet a few other criteria to be piracy:

In the past, piracy included attacks on ports and other settlements on land. Most modern laws, though, apply only to attacks on ships at sea. Some laws apply only to ships in international waters, and some apply whether a ship is in motion, at anchor or berthed. In addition, some current definitions of piracy apply only if the attackers use a ship to reach their target. In other words, not every definition of piracy includes people stowing away on a ship in order to attack it at sea.

The Economy Made Me Do It

Economic conditions have had a big impact on the prevalence of piracy. For instance, during the 16th and 17th centuries, piracy flourished as ships carried expensive goods from the Americas to Europe. In other periods, poverty has led to an increase in piracy, as has the absence of centralized governments and law enforcement authorities in piracy-prone areas.