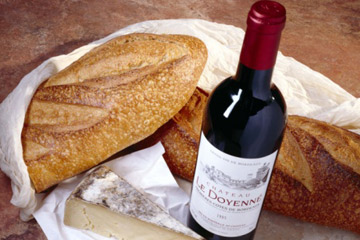 The French take pleasure in the little things -- and the tasty ones, too.
Jupiterimages/Getty Images/Thinkstock

France isn't all French toast and berets. For one, French toast has been a good way to use up stale bread since the Romans first invented it (and some say we just called it French toast because the French made it often), and mimes were just as popular in ancient Greece as they are on the streets of Paris.

Which leads us to a larger point: A lot of us have the wrong idea about France and what French culture truly is.

For some reason, French stereotypes -- the cigarette-smoking beret-wearer, pondering the meaning of existence with baguette in hand -- still hold a grip on foreigners. And let's be honest: There's still a strong cultural stereotype of rude, snooty French people looking down their noses at non-French visitors.

In this article, we'll not only separate French tradition from stereotype, but we'll also explain how some of these traditions developed and the role they played in shaping historical and modern French culture.

Why not start with the pesky stereotype of the French snob? Denis Bisson, cultural attaché in the San Francisco French Consulate, thinks this idea is a holdover from times when language presented more barriers. "In today's globalized world, differences in social behavior and etiquette tend to be less visible," Bisson says. "France is one of the most visited countries in the world, Paris being the No. 1 capital city, and the French are more and more aware of the necessity (and the pleasure that goes with it!) to be more welcoming. A generation ago, language was a barrier, it's less and less the case now, when people have a better command of English."

While studying French traditions, it's also helpful to keep in mind the "French Paradox." That is what doctors call the seemingly puzzling low rates of heart disease and obesity in a culture that eats three times as much fat as the average American diet. One good reason for this paradox is that although they consume three times more fat than Americans, they eat it in smaller portions at a time and avoid trans fats from processed foods.

This idea -- that quality of life should be cultivated and savored -- doesn't just apply to the French approach to food.

From fashion to the arts, the French take pride in not just tradition, but the depth and origins of their way of life. Studying American culture, we might start out with a description of the working habits of the United States. But let's approach this the French way and jump into something more leisurely as we explore the vacations and holidays that the French enjoy.