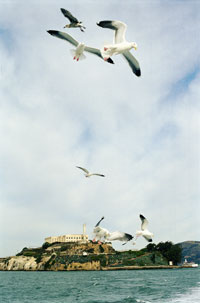 We don't know much about the early days of Alcatraz Island, because no one called it home. There is speculation that Native Americans used it as a place of exile for those who broke tribal law. More likely, local tribes visited the island to gather eggs, since birds were the only creatures who lived there. In fact, the name Alcatraz comes from a Spanish word for gannets or pelicans: alcatraces.

In 1847, the first official survey of the island took place. Lieutenant William H. Warner of the U.S. Army noted that the island overlooks the entrance to San Francisco Bay and would make a perfect location for a fortification to guard the area [source: Oliver]. The army built a dock and reshaped the island to construct defensive positions. Several buildings had been constructed by the 1860s, when dozens of artillery pieces were placed to help defend against possible Confederate incursions during the Civil War. A large building called the Citadel was erected to house the troops stationed there -- the prison at Alcatraz would later be built on the Citadel's foundations.

No major military events occurred at Alcatraz, although the island's guns were fired several times, always due to a misunderstanding or misidentification of a ship. As the years passed, the military began shipping prisoners to the island, usually soldiers who had deserted or committed other crimes. The commanding officers would stick these prisoners wherever they would fit (in the Citadel's basement, at first), building new places for them almost haphazardly. At the end of the Civil War, it was decided officially to convert the island into a military prison. The Citadel was converted and expanded in the 1870s.

By the dawning of the 20th century, the old military prison was overflowing and outdated. The massive earthquake that struck San Francisco in 1906 shunted almost 200 city prisoners to Alcatraz, proving once and for all that a modern prison was needed. The Citadel was torn down, and the United States Military Prison, Pacific Branch, Alcatraz Island was completed in 1912.

By the 1930s, military officials had begun to question the need for a prison like Alcatraz. The military wasn't in the business of running prisons, and it was creating a drain on their budget. At the same time, Prohibition and other factors had led a high crime rate nationwide. J. Edgar Hoover, head of the FBI, was spearheading efforts to crack down on criminals. He needed a fearsome prison to send criminals to, and Alcatraz fit the bill. The change of ownership and renovation of the prison took place between 1933 and 1934, when the first prisoners arrived under a shroud of secrecy.

Alcatraz's life as a federal prison ended for many of the same reasons it stopped being a military prison. Everything on Alcatraz had to be shipped in -- every meal, magazine and pack of cigarettes -- which made running Alcatraz far more expensive than a mainland prison. In addition, the old concrete building was deteriorating due to the constant contact with saltwater. It would cost millions to repair. The final nail in the coffin was the escape of 1962. If the prison wasn't truly escape-proof, what purpose did it serve? In 1963, it was closed down permanently.

The history of Alcatraz wasn't over, however. In the late 1960s and 1970s, the island was occupied by a band of Native Americans from several tribes who demanded that they be given ownership of the island. Ultimately, their demands weren't met and the takeover failed, but it brought a great deal of attention to the inequalities suffered by Native Americans. In the aftermath, government policies changed to allow tribes to determine their own fates and exist as political and commercial entities [source: Johnson].

In 1973, Alcatraz Island became part of Golden Gate National Recreation Area. The prison still stands, and millions of visitors have taken tour boats to the island to experience a small piece of U.S. history.