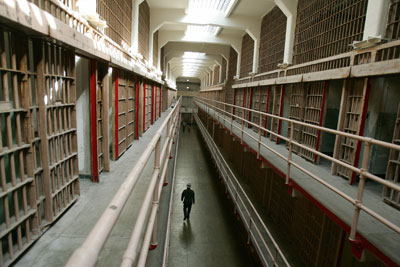 For the prisoners living in Alcatraz prison, life was similar to life in other American prisoners of the era. That is to say, not especially pleasant, but neither was Alcatraz the brutal hellhole many blockbuster films make it out to be. In the mornings, each prisoner swept his cell clean, dressed and stood ready for a head count. Then they all marched to the mess hall for breakfast before moving on to work at the docks, in the laundry area or at one of the industrial buildings on the island. They could also spend time studying in the library. After dinner, inmates returned to their cells -- "lights out" was at 9:30 p.m.

The prisoners nicknamed the long concrete walkways between the cell blocks. The central walkway was Broadway, and the others were named Park Avenue and Michigan Avenue. The area in between the mess hall and the cell blocks was called Times Square. At either end of the main cell block area was a "gun gallery," a multilevel walkway enclosed in bars and mesh and patrolled by armed guards who had a clear view (and a straight shot) at any point on the cell block.

There were some key differences at Alcatraz, however. The first warden, James Johnston, upheld absolute discipline and a very rigid routine. For the first few years of operation, the prisoners weren't allowed to talk at all except for brief periods, even at meals. Speaking out loud resulted in a stay in the dungeon or on D Block. This enforced silence was one aspect of life at Alcatraz that really grated on the inmates. Eventually, they began talking out en masse, realizing that there weren't enough isolation cells to hold them all, and the talking ban was relaxed [source: Barter].

It's true that the treatment of prisoners in the isolation cells was inhumane, and there were protests regarding prisoner treatment at Alcatraz at the time. These led to gradual reforms that removed some of the harshest punishments. On the other hand, many Alcatraz prisoners were happy to be there instead of another prison. The intense discipline and routine meant the prison was kept very clean, and it was relatively safe compared to other places.

Convicts weren't the only ones living on the island. The guards and their families lived there too. The children took a boat off the island to attend school every day. In fact, nothing was produced or grown on the island, so a boat ride was required for every shopping trip. The island did have a movie theater and other recreational opportunities. But life was also a bit strange. Children weren't allowed to have toy guns, because a prisoner could get a hold of one and use it to bluff a guard and escape. Magazines had to be carefully destroyed, because the prisoners weren't allowed to receive news of the outside world and definitely weren't allowed to read about sex or crime. Razors, knives and silverware had to be thrown into the bay [source: Babyak].

Next: inmates who tried to escape the escape-proof prison.

All inmates at Alcatraz were treated the same, even if they were famous. Crime boss Al Capone, who had it easy at his prior prison and ran his criminal empire from behind bars, came to Alcatraz expecting the same deal. He received no special treatment and spent most of his time at Alcatraz sick with syphilis.

The legendary Birdman of Alcatraz, Robert Stroud, was known for breeding and studying dozens of birds in his cell at his former prison. No birds were allowed in his cell at Alcatraz, despite his growing fame outside prison walls. In fact, when his own biography was published, he wasn't allowed to read it because it had chapters about his criminal life [source: Oliver].