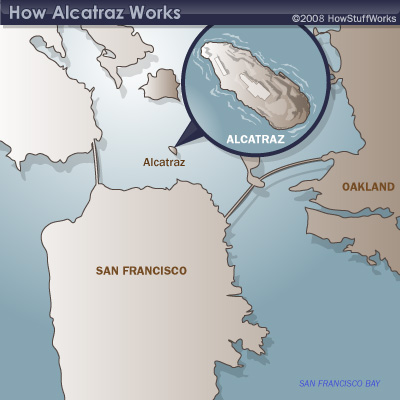 Alcatraz Island is actually the top of a mountain, a rough spit of sandstone jutting from San Francisco Bay. The bay was once a valley, but at some point tens of thousands of years ago, sea levels rose and the valley filled in with water. Very little soil covers the island, and as a result, very little plant life grows there naturally (some trees and bushes were brought there by construction crews in the past).

The waters around Alcatraz are especially treacherous. They're usually very cold, below 60 degrees Fahrenheit (16 degrees Celsius), and the currents are strong. When the tide recedes, the current tends to draw out toward the Pacific Ocean, rather than toward San Francisco. To make matters worse, let's not forget the great whites.

Perched on this island rock is a concrete and steel prison. It was first built as a military prison in 1912. In 1934, it was completely remodeled, making it the most high-tech prison in the U.S. at the time.

The prison was built to accommodate about 600 prisoners, although as a federal prison, Alcatraz only held a maximum of 300 inmates (some of the cell blocks from the military prison era were closed off with wire grating). The initial 1912 design was innovative -- the island provided one barrier to escape, and the thick concrete walls and barred windows of the prison building created another. Within the prison building were cell blocks, rows of iron cells that had no point of contact with any outer walls. Each cell block was like a prison inside a prison. The 1934 remodeling replaced all the iron bars with hardened steel, called "tool-resistant" steel because it could withstand cutting with a hacksaw. It cost more to install the new steel bars in 1934 than it cost to build the entire prison in 1912: more than $200,000 [source: Barter].

New steel wasn't the only new technology on the island. A mechanical locking system that allowed guards to open certain cell doors or groups of cell doors remotely, by pulling levers at a control panel, replaced the old system of a single key for each cell. Metal detectors, a relatively new technology in 1934, were also placed on prison grounds.

There were three cell blocks, A, B and C, all running parallel to each other. A Block was the shortest, while B and C ran the length of most of the main building. Each cell block was three tiers high. Each cell was 5 feet (1.5 m) wide by 9 feet (2.7 m) deep, and contained a bed, a sink, a toilet and a small desk for writing. Two shelves for personal items ran along the back wall. Three of the cell walls were solid concrete, while the front "wall" was made of the hardened steel bars. Only one prisoner lived in each cell.

Next, we'll see what life was like inside Alcatraz.

What do you do when inmates in a jail misbehave? Put them in a more restrictive part of the jail. At Alcatraz, this purpose was served by D-Block, where prisoners spent almost every minute in their cells, with only one hour per week for exercise. Repeat rule breakers might end up in "the Hole," one of five special cells with an iron door that blocked all light. One final cell was for the worst of the worst. It had no toilet, just a hole in the floor. Prisoners were often left in this cell naked and without any blankets, and the food was meager.

Prior to D's construction, troublesome prisoners were sent to "the dungeon," a series of old cells in the basement, left over from the original building upon whose foundation the prison was built.