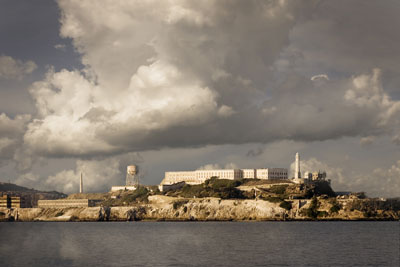 Surrounded by strong currents and fortified by steel and concrete, Alcatraz federal prison was meant to be the highest-security prison in America, a place no one could escape from. The island on which it rests shuns even plant life. Alcatraz is essentially a rock surrounded by water -- hence its forbidding nickname, "The Rock." The only creatures that don't mind being around are the great white sharks that troll the chilly water. Beyond the prison's security measures, the island itself provided a strong deterrent to escape.

The name Alcatraz at one time represented the worst side of American life, home of the hardest criminals guilty of the worst crimes. It gained such mystique that some gangsters actually wanted to go there to enhance their reputation among other criminals.

The mystique grew further when Hollywood got hold of it. Movies depicted Alcatraz as haunted, dramatized life inside the prison and glorified the criminals that were sent there, giving Alcatraz a larger-than-life image. Escapees, kingpins and the most famous inmate of all, the Birdman of Alcatraz, continued to inflate the prison's reputation in the public eye.

Reality at the prison was sometimes stranger than fiction -- there were several daring escapes, complete with a few missing bodies and an account of chipping away at walls with spoons. In general, however, the story was often more mundane, because conditions at Alcatraz probably weren't much worse than at other prisons at the time.

Alcatraz has a history much greater than the almost 30 years it spent as a federal penitentiary. As a fort, a lighthouse, the site of a Native American occupation and a national park, Alcatraz has changed through the centuries, often reflecting changes in American society. In this article, we'll learn about the infamous federal prison, some of the notable people who were sent there and famous incidents in the prison's history. We'll also find out how Alcatraz became a prison and why it's an important location in the movement for greater Native American rights.­

A Light In the Fog

San Francisco Bay is notoriously difficult to spot from the ocean, even in daylight. At night in a typical fog, it can be very dangerous to navigate. A 40-foot (12.2-m) lighthouse was built on Alcatraz in 1854. In addition to the light, it had a bell that could be rung in dense fog to warn ships.

In 1909, new construction obstructed the lighthouse, so the old one was razed and a new one built. It still operates today.