Polygamy and the Mormon Church 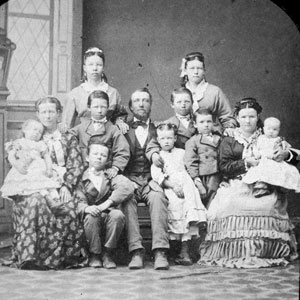 While this Mormon family from the 1890s still practiced polygamy, the LDS church banned all new plural marriages in 1889.
Kean Collection/Archive Photos/Getty Images

Polygamy was slow to spread throughout the Church, taking years to catch on. It was not an easy directive to accept. For one thing, plural marriage was, and still is, illegal all over North America; accepting Smith's revelation made Mormons outlaws (although the principle of religious freedom often protected them from government interference, at least in the beginning).

Plus, in a group of devout people who had always practiced monogamy, a directive for a man to have sex with more than one woman was a tough sell.

But within a couple of generations, Smith's example (he ultimately married dozens of women, some quite young) became, if not the norm, then at least pretty normal. Enough people engaged in polygamy that it became a core practice within the Mormon belief system.

That lasted for about 60 years. The Divine Principle is still in the Mormon scripture and is still respected by the LDS Church, but the practice is not. In 1889, then-President and Prophet Wilford Woodruff received a revelation stating that the time for polygamy (and the outlaw Mormon) had passed.

The next year, the LDS issued a decree that there would be no new plural marriages in the Church, and in the early 1900s, the Mormon leadership began to excommunicate those Mormons still forming new polygamous unions. Those excommunicated Mormons became the Fundamentalist sects that still engage in polygamy today.

This is an important distinction to make. The differences between LDS Mormons and Fundamentalist Mormons go beyond mere labels.