Why does Jewish law forbid gifts to an unborn child? 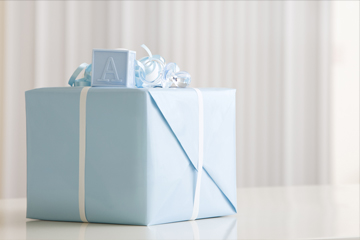 These days, Jewish families are more accepting of presents for unborn children, but it used to be seen as bad luck.
Vstock LLC/Getty Images

For many women with children, one of the most memorable milestones of pregnancy is attending a baby shower as the guest of honor. The celebration not only "showers" the mother-to-be with well wishes and advice, but with gifts for her unborn child -- unless that child is being born into a Jewish family.

Although there is not a law that strictly forbids gifts to an unborn child, traditional Jewish culture warns against baby showers and gift giving before a baby is born. Orthodox Jews, for example, believe that celebrating a child before he or she is born will draw evil spirits and result in bad luck for the child. It's a belief that stems from medieval times, when few infants survived [source: Kuritski].

Today, the customs that once made baby showers taboo have become more relaxed in many Jewish circles. Some people compromise by buying and receiving a few baby gifts, but waiting to decorate the nursery. Others hold fast to tradition by waiting to buy or accept baby gifts until after the child is born and is officially accepted into the Jewish community at a naming ceremony. Nothing -- not a crib, diapers or baby blankets -- is brought into the home during pregnancy. Even the baby's name is not spoken aloud until after he or she is born.

There are other reasons to hold off on the preparations, too. Mourning a stillborn baby may be more difficult when a fully decorated nursery sits empty or when there are stacks of presents that won't be put to good use. And, for some people of the Jewish faith, holding fast to cultural tradition is an act of faith in itself. It's a way to show respect for the past while being sensitive to those who either can't conceive or who have lost children of their own. It's a concept known as menschlichkeit, which calls people to be humane and decent to others.

However, in an age when infant mortality rates are historically low, some people in the Jewish faith find the reluctance to participate in baby showers outdated and superstitious. In cases such as this, there is compromise: Expectant parents purchase baby items online, but schedule them to be shipped after the baby's arrival date [source: Katz-Stone].