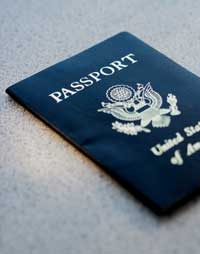 Want one of these? You'll need a legal name to get a passport, driver's license and social security card.
Tom Grill/Getty Images

For people, names help to establish our unique place in the world, often summing up in one word our basic personal data of gender, nationality and family history. Whether based on days of week (as with some tribes in Africa), Hopi familial tradition or Jewish religious custom, all cultures have developed naming conventions. And after all that effort, many still tweak their own names into a nickname like Moose or Flash.

But are we legally obligated to have a name? Could we erase it and go with nothing, diving into the ultimate anonymity?

In the United States, going without a name is not inherently illegal. Police won't arrest you for not having a name. But you can't legally identify yourself without one, which would make things difficult for you. For instance, you need a legal name on a birth certificate or social security card to obtain a driver's license or passport, open a bank account and get a job.

By virtue of common law adopted through court decisions rather than legislative actions, you can change your name without a court order simply by using it in all aspects of your life. While state laws govern how you can legally change your name, in general, Beauregard can become any Tom, Dick or Harry as long as the new moniker isn't:

Other countries including Australia, Germany and Spain have similar laws regarding first names. That said, you still could not legally change your name to nothing because you would have no acceptable way to verify your identity.

But what about naming babies? Can parents choose to not name their child? Read the next page to find out.

In 1993, following a feud with his record label Warner Bros, the recording artist born Prince Rogers Nelson changed his name to The Love Symbol No. 2, or the sign 0(+>. Although Prince retained his legal name -- and switched back to using it in 2000 -- for seven years, people simply referred to him as The Artist Formerly Known as Prince, or TAFKAP for short.