Historic Events in the Office of the U.S. Vice Presidency 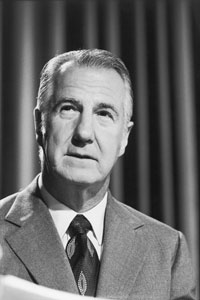 Perhaps one reason the vice presidency has so long been a disrespected and ofte­n ridiculed office, is due to the fact that the federal government has functioned perfectly normally on a number of occasions while the seat was vacant. Throughout U.S. history, the country has had seven vice presidents die in office and one resign (more on that in a moment). These events, in addition to the eight times vice presidents have risen to the presidency following the death of a president, left the vice presidential office unoccupied on 17 occasions.

­On most of these occasions, the office remained vacant for the remainder of the presidential term, at times more than three years. In only one of those cases, following the death of Vice President George Clinton, was the position filled in less than a year. Even in the modern era, when a vice president ascends to the presidency, the office may remain vacant for a month or more as Congress vets and confirms the president's appointed replacement. Vice President Clinton also had another distinction; he is one of only two vice presidents to serve under two different presidents, Thomas Jefferson and James Madison. The other vice president to hold that honor was John C. Calhoun, who served John Quincy Adams and then ran with the opposition candidate, Andrew Jackson, who won.

The appointment of a vice president in times of vacancy spelled out in the 25th Amendment became vitally important only six years after it was passed. In 1973, Spiro Agnew was indicted on charges of tax evasion and resigned the vice presidency. President Richard Nixon appointed (and the Senate confirmed) Gerald Ford, a House member from Michigan, to fill the role. The following year, the 25th was invoked again after President Nixon resigned during the scandal surrounding the break-in of the Democratic Party headquarters at the Watergate Hotel. Ford ascended to the presidency (becoming the first person to serve as both vice president and president and not have been elected to either office) and appointed Nelson Rockefeller to his former position.

One of President Ford's first decisions as president was to use his power to pardon Richard Nixon of any crimes he may have committed while in office. Ford was later understood as laying to rest for better or worse a national disgrace, but at the time and for many years to follow, the pardon was seen as the worst kind of political act [source: The U.S. Senate]. Ford was defeated by President Jimmy Carter in the following election.

We've learned that only four incumbent vice presidents were directly elected to office, but other previous vice presidents managed to become elected as president following a hiatus from the White House. Vice President Richard Nixon ran for the presidency in 1960 but was defeated by Sen. John F. Kennedy. Nixon made it to the highest office in 1972. Theodore Roosevelt, Calvin Coolidge, Harry Truman and Lyndon Johnson were the only vice presidents to ascend to the presidency by means of death who were re-elected.

The vice presidency also has been a proving ground for breaking social barriers. In 1984, Geraldine Ferraro became the first female vice president to be nominated to a major party ticket when Democratic candidate Walter Mondale chose her as his running mate. The Republican Party blazed the same trail in 2008, when Sen. John McCain selected Gov. Sarah Palin for the bottom of the ticket. And the 2000 race saw the first Jewish vice presidential candidate when Vice President Al Gore chose Sen. Joe Lieberman as his running mate.