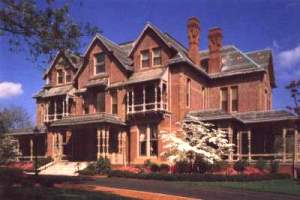 ­Nearly ­all of the states and territories in the U.S. have an executive residence for the governor and First Family. These homes serve not only as the primary residence for each state's First Family, but also as that state's face to the nation. For the past 110 years, North Carolina's First Family has lived in the Executive Mansion. In 2000, when this article was written, the mansion was occupied by Governor James B. Hunt Jr. and his family. Governor Hunt was the 26th governor to live in the Executive Mansion and the 66th governor to serve North Carolina since the end of the American Revolutionary War. When he left office in 2001, Governor Hunt had completed an unprecedented fourth term as North Carolina's governor.

In addition to being the First Family's primary residence, the mansion is also host to touring school children and visitors, and receptions and dinners for invited dignitaries, state officials, and civic organizations. In this edition of How Stuff Works, we'll take a peek into the historic North Carolina Executive Mansion and see the mansion staff's behind-the-scenes preparations for an executive state dinner!

History of the Executive Mansion

Prior to the 1880s, North Carolina's First Families lived in various eastern North Carolina locations. The first official residence of North Carolina's governors was Tryon Palace, a Georgian-style colonial mansion located in New Bern, N.C. When the state legislature established Raleigh as the state's capital in 1792, the Governor's Palace was built in downtown Raleigh. This second executive residence was a large brick house with elaborate white columns established in 1816. The home served 20 of North Carolina's governors and served as Union General William T. Sherman's headquarters during his Civil War campaign through the state. By the early 1860s, the home was in severe disrepair and was no longer suitable for the governor's residence. From 1865-1891, North Carolina governors had to rent their own homes in Raleigh, or stay at the Yarborough House, a downtown residence. Today, the Memorial Auditorium in Raleigh is located on the lot where the Governor's Palace once stood.

The current Executive Mansion was begun in 1883 and completed in 1891 in the Queen Anne gingerbread cottage style of Victorian architecture. It has nearly 35,000 square feet of living, office, basement, and storage areas. Most of the building materials for the house are North Carolina products. Exterior and interior woodwork are local heart pine, the sandstone trim came from Anson County, marble steps on the north side of the house are from Cherokee County, and the exterior bricks were made from Wake County red clay and molded by prison labor. Many of the bricks, particularly in the sidewalks surrounding the house, still bear the names of the laborers who made them. There are more than 50 rooms throughout the mansion and the first floor public area consists of six rooms plus the Grand Hallway.

Today, the mansion is a majestic place for entertaining large and small groups, as well as a comfortable place for private state business meetings. With its stunning architecture, symbolic historical and cultural significance, warm appeal, and breath-taking interior design, the Executive Mansion has come to embody the pride and history of North Carolina.

The mansion's main floor (the public floor) is decorated in rich greens, burgundy, and gold, with period furniture and decorations from across North Carolina. During the first and second Hunt administrations, Mrs. Hunt worked to make the mansion more accessible to the people, including opening the house during the Christmas holidays. In recent years, the mansion has been significantly renovated and modernized, including restoring the Governor's Library (which involved stripping over 20 coats of paint off the original woodwork), transforming the east screened porch into a light-filled glassed-in Morning Room, replacing the slate tile roof, gilding the walls in the Ballroom, adding handicap access, and redecorating the Ladies Parlor.

For entertaining, the mansion has the Ballroom and the Dining Room. The mansion Ballroom is a grand room with aged hardwood floors, gilded wall decorations, heavy gold drapes, two working fireplaces, twin Sheffield chandeliers, and four mirrors. The Ballroom has a balanced, symmetrical design, and is located between the Governor's Library and the Gentlemen's Parlor on the south side of the residence. French doors at the south end of the room lead out into the South garden, a lovely, private garden full of lush flowers and shade trees.

The mansion Dining Room is an elegant, intimate room for receptions and smaller dinners. The mahogany banquet table can seat 24. The room is a beautiful colonial blue, highlighted by an Austrian crystal chandelier which has gilded metal and tinted prisms.

The Martin administration, which came in between Governor Hunt's second and third terms, enhanced the mansion grounds and established the beautiful Victorian garden on the south end of the home. In the most recent Hunt administrations, Mrs. Hunt extended tour hours and special tours for those with visual, hearing, or other handicaps. According to the Executive Mansion Fine Arts Committee, "more North Carolina school children visit the mansion now than ever before."

Special thanks to the staffs of Governor & Mrs. James B. Hunt Jr. and the Executive Mansion for their generosity and hospitality.

In addition to the personal staffs of the governor and first lady, the executive mansion has many others who pride themselves in keeping the residence running. The North Carolina State Highway Patrol provides security and has officers in the mansion on Executive Detail. Because of their extended training and work detail, these officers are often referred to as Super Troopers, and they provide security for the executive grounds, the Governor and First Lady, and mansion guests. "It takes a long time to get here, even after you apply," said one officer. "It's a job you take because you love it."

Another important group of people in the mansion are the tour guides, or docents. The docents put in more than 1,200 volunteer hours each year. The mansion is host to nearly 1,000 tours with guests from all over North Carolina, the U.S., and the world.

Another integral part of the mansion staff are the trustees. Trustees are men and women incarcerated in area minimum-security correctional facilities. They are responsible for many different functions throughout the mansion, and many come to the mansion without prior skills. Vicki Cilley, Residence Manager under Governor and Mrs. Hunt, dedicates time to train the trustees for the mansion. In addition to the regular mansion staff, trustees are responsible for mansion cleaning, gardening, landscaping, and even cooking. While at the mansion, trustees gain skills that they can use when they re-enter the workforce. "I have one trustee in the kitchen right now," said Cilley. "I'm teaching him about baking and he's so eager, so anxious to learn. That makes it worthwhile."

In 1999, the North Carolina Governor's Mansion had 51,435 visitors; in December 1999 alone, when the mansion is decorated for the holidays, there were nearly 20,000 visitors and guests. 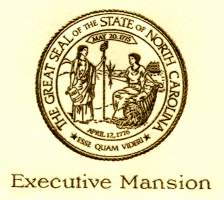 State Seal on an Invitation to the Executive Mansion

The process for planning a state dinner can get complicated. From setting a date to sending invitations and coordinating seating arrangements, the mansion staff is very efficient. "Communication is key here at the mansion," said Cilley. "We must work as one well-oiled machine." A common date and time must be pulled from the governor's calendar, the mansion calendar, and the first lady's calendar. These calendars are filled in six weeks in advance and reviewed in detail each week.

Once a common date is set, Janice Shearin -- who served as Executive Assistant to Mrs. Hunt -- facilitates the invitation process. The mansion prides itself on providing fine Southern hospitality to all who visit, and North Carolina's first ladies have the pleasure of directing entertainment and events associated with the Governor's office. Guests are asked to RSVP through a dedicated, automated phone line at the executive mansion.

At a state dinner, the governor and first lady typically sit at separate tables so they can better entertain their special guests. Every effort is made to include at least one member of the Governor's staff at each table. Guests are seated eight to a table, alternating gender for variety. Once a guest list is finalized, the list is presented to the governor. Shearin said that it is not unusual for a guest to cancel at the last minute, or to change their mind and call that they will be coming. For this reason, place cards are created at the last minute. 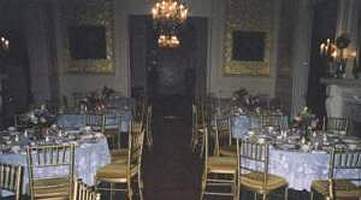 Dinner in the Ballroom
Courtesy Photo

In addition to training the mansion's trustees, Cilley was responsible for table arrangements, menus (in conjunction with mansion chef, Steve Moravick), floral arrangements and table setup. She said that some food prep work can be done the day before an event, so long as there will be no deterioration in the quality of the food. Sauces can be prepared and refrigerated; tart shells can be made, baked, and stored; and vegetables can be cleaned in advance, saving valuable pre-event time.

While the Ballroom and Dining Room accommodate formal events, more casual gatherings, such as lunch or an afternoon tea, can be seated in the Library or Morning Room. Throughout the year, these rooms are decorated with antiques from across the state, including period pieces that have been traced back to Governor Daniel Fowle, the first governor to live in the Executive Mansion. Cilley was responsible for coordinating the careful move of antique pieces found in the Ballroom. When larger events are held, seating can spill into the Gentlemen's Parlor or the Governor's Library.

The mansion menu varies depending on the type of meal (lunch vs. dinner) and who the guests are (military honorees, N.C. Business Council, Special Olympics Board of Directors, etc.).

Most dinners include three courses, depending on the group attending, and special consideration is always given to guests who have different dietary needs. Appetizers and light beverages may be served if there is a wait before the dinner seating, and would be followed by the first course (soup, salad, or an appetizer), the second course (the entree), and the final course (dessert). A full, formal dinner for 24 people requires approximately 10 pounds of beef filet and five heads of Romaine lettuce. For dinners in the Ballroom (up to 72 people), the kitchen prepares approximately 30 pounds of beef and 15 heads of Romaine lettuce. Wine may also be offered with each course.

One of the best kept secrets at the mansion is the fresh lemonade. Each week, a case of 115 lemons is squeezed to make the 30 gallons of lemonade for the mansion staff and visitors. In addition, the kitchen staff also prepares 30 gallons of sweet iced tea for the staff and visitors each week. If lemonade or sweet tea will be used for a mansion event, the amount made is doubled. 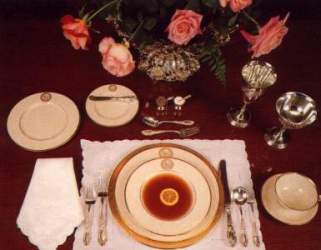 As an event begins, security directs mansion traffic, someone from the mansion staff greets guests, and trustees are available to check coats. "Regardless of what's going on behind the scenes, we want things to seem as effortless as possible," said Cilley. The staff strives to achieve a natural flow for the evening. Tables are served one at a time by four servers each carrying two plates while staff and trustees circulate to get an impression of how the guests are enjoying dinner, to refill iced tea and water, and to cue the kitchen staff when the guests appear ready for the next course or for cleanup.

When the last guest is gone at the end of the night -- regardless of the time -- the clean-up begins! The dishes are put in the kitchen dumbwaiter and sent down to the commercial dishwasher located in the mansion basement. Table linens and napkins are sent upstairs to the laundry facility, and tables are taken down and stored. Any furniture that was moved before the event is put back into place. Tomorrow, the people will come to visit the mansion, and the day will start all over again.

How Book Banning Works
What Is an Oligarchy and Has the U.S. Become One?
How Executive Powers Work