The Vice Presidency After Gore and Cheney 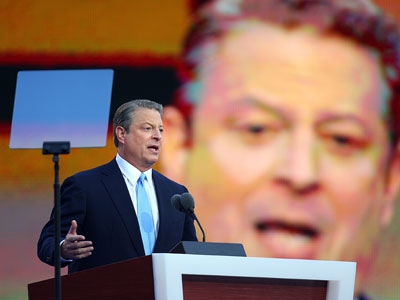 Vice President Al Gore has continued the work he began as a vice president, including winning the Nobel Prize for his environmental work and remaining a powerful figure in the Democratic Party.
Marc Piscotty for Congressional Quarterly/Getty Images

­The authors we­re describing the vice presidency of Al Gore, a former senator from Tennessee who served from 1992 to 2000 under President Bill Clinton. Perhaps "beside" is a better word. From the outset, Gore changed the terms of the vice presidency, bringing along members from his Senate staff and installing trusted friends into appointments that customarily were assigned by the president, such as the chairman of the Federal Communications Commission (FCC). These appointments weren't mere political favors; Gore made use of his friends and allies. Under the Clinton/Gore administration, the FCC oversaw the creation of a new tax on telecommunications companies. This tax funded a federal program to install Internet connections in public classrooms and the passage of v-chip technology that allows parents to block programming on their televisions.

Although Gore was a benefactor of emerging technology during the '90s, he was better known as a champion of the environment. He pressed President Clinton to lobby Congress for stricter mileage standards for American-made cars. He also managed to extend the ban on offshore oil drilling along the Atlantic Coast and in the Arctic National Wildlife Refuge. Despite Congress' abject refusal to ratify the Kyoto Treaty on climate change, Gore flew to the conference in Japan to negotiate among other nations.

Vice President Gore also played a further role in foreign policy. Most presidents have jealously guarded their place over this domain. Gore carved a place for his office at the foreign policy table by creating an alliance with his Russian counterpart and overseeing the removal of nuclear missiles from post-Soviet splinter states. Gore also put strong pressure on President Clinton to order air strikes against Serbs engaged in ethnic cleansing against Muslim Bosnians in the Balkans [source: Broder and Henneberger].

Vice President Dick Cheney, who served President George W. Bush from 2000 to 2008, expanded the office's power even further. In some cases, he actually directed the president -- or at least led him in a favored direction. In 2001, Cheney presented a draft of an executive order that denied a trial or court martial to terror suspects, which the president signed within an hour [source: Telegraph].

While in office, Vice President Cheney created a special top secret classification for his files, Top Secret/SCI (sensitive compartmentalized information), now the highest classification of sensitive material [source: Washington Post]. Cheney, a veteran House member from Wyoming, also served as emissary between the executive and legislative branch. He argued vehemently for the restoration of presidential powers, reasoning that they'd been limited by Congress in response to abuses by the Nixon administration (in which Cheney began his political career as an aide) and should be expanded in the face of the war on terror. Overall, Cheney was successful in his arguments.

There are drawbacks to taking an advanced leadership role; along with taking credit for the successes, the vice president also has to answer for the mistakes. Vice President Gore was roundly criticized for a deal he brokered with the Russians that allowed them to sell weapons to Iran, an illegal act on Gore's part [source: Broder and Henneberger]. And revelations about Cheney's involvement in the establishment of illegal treatment of prisoners at U.S. prisons overseas led him to be viewed as a "comic book villain" by Washington insiders [source: Telegraph].

­While the limits of power Gore and Cheney pushed the vice presidential to was historic, there have been many noteworthy events in the office during its history.