Executive Roles and Responsibilities of the U.S. Vice President 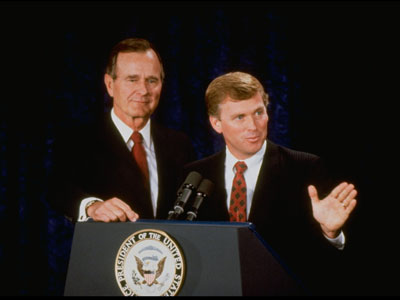 Sen. Dan Quayle, vice president under George H.W. Bush, was chosen in the 1988 race to balance the ticket in part because of his youth.
Diana Walker/Time Life Pictures/­Getty Images

Perhaps the most contiguous role of the vice presidency over the years has been that of ticket balancer. Vice presidents have often served as foils to the president; conservative or liberal, experienced or young, domestically minded or interested in foreign policy. The constituency a vice president brings along is also important; a Southerner may be chosen to balance a Northern presidential candidate. The vice president's importance in balancing a ticket during a campaign is generally short-lived, however. Vice presidents chosen mostly or solely on their ability to balance tickets -- such as Vice President Dan Quayle -- have traditionally seen "their status and value evaporated after election day" [source: Hatfield].

Modern vice presidents have also assumed another traditional role during the campaign: attack dog for the head of the ticket. While the electors of a state are compelled to cast separate votes for the president and vice president, the popular vote is by ticket or party. Conventional wisdom states that individual voters generally vote for the head of the ticket. Largely freed from constraints of popular opinion, the vice presidential candidate can serve as a vocal critic of the opposition and launch attacks against it. This allows the presidential candidate to maintain an air of composure and decorum toward the rival candidates, while still attacking the opposition's credibility, experience and policies. This role of surrogate may also continue after inauguration, as some modern vice presidents have continued their role of defender of presidential agendas and lambaster of presidential critics.

Some vice presidents have taken a more active role than others. Under President Dwight Eisenhower, Vice President Richard Nixon took strong stances on behalf of the administration. Nixon largely took matters into his own hands to shape the roles of the vice presidency to suit his ambitions, and he was successful. Whereas vice presidents before him may have simply smiled and left debate with foreign leaders to their president, Nixon often took the foreign policy reins. In one famous visit to the USSR in 1959, Vice President Nixon toured an international exposition in Moscow with Soviet Premier Nikita Khrushchev. Nixon debated the merits of capitalism over democracy with Khrushchev, much of the discussion being caught on television, and launching Nixon and the office of the vice president into new levels of prestige in the public opinion.

Ultimately, the vice president has one main duty, to preside over the Senate.