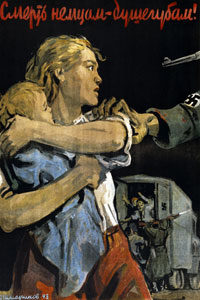 War propaganda debuted during World War I and was considered critical to the success of the war effort. Both Great Britain and Germany used propaganda to win U.S. support. Germany had been trying to garner the sympathies of U.S. citizens of German descent but was cut off from communicating directly with the American public. As a result, sympathy for Great Britain took over, and support for the war effort aligned accordingly.

Under Hitler's regime, propaganda was used to its fullest extent. Information available to the Germans was limited to that which cast the Nazis in a favorable glow. The idea was to eliminate opposition through a lack of information -- documents that didn't uphold Nazi philosophies were burned. Meanwhile, radios were sold at dirt-cheap prices to allow everyone to hear Hitler speak. Films also facilitated the spread of Nazi goals; in these movies, Jews were compared to rats, Hitler was made out to be a godlike figure and Germans in other parts of the world were portrayed as being horribly abused [source: History Learning Site].

Propaganda increasingly played to people's emotions during World War II. Although radio broadcasts, motion pictures and other mediums were popular communication tools, posters achieved a renaissance thanks to the simple fact that they could be put up anywhere, even at churches and places of business. What's more, posters were effective: Most people remember pictures more clearly than words [source: Visual Culture]. These posters made war glamorous, depicting men as heroes and the people at home as the backbone of the country. One of the main purposes of World War II propaganda was to encourage military enlistment, such as the famous "I Want You!" posters depicting Uncle Sam. Masculine images and powerful machines were also pictured in many posters to showcase America's strength [source: Powers of Persuasion].

War propaganda served to motivate the people on the home front to boost factory production, which had declined with so many men overseas. Famous icons such as Rosie the Riveter encouraged women to do their wartime duty by working in factories. Women in these posters were portrayed as capable but feminine, such as the poster that read, "Longing won't bring him back sooner -- get a war job!" [source: Powers of Persuasion].

The propaganda image of Rosie the Riveter motivated this young woman, Wendy the welder, to work at the Electric Boat Co. in 1943.
Bernard Hoffman/Time & Life Pictures/Getty Images

Although the Civil Rights movement was still a couple of decades away, posters catered to black U.S. citizens by promoting their role in the war. One poster featured a black man working side by side with a white man under the motto "United We Win" [source: Powers of Persuasion].

Because food and other items were in short supply during the war, posters communicating the need to ration -- and that soldiers in the fields needed supplies more than citizens at home -- were distributed widely. One read, "Waste Helps the Enemy," and another advocating carpooling claimed, "When You Ride Alone You Ride with Hitler," [source: Powers of Persuasion].

Other posters played to Americans' fear of Nazis, warning that the impact of Hitler's regime could manifest at home. Civilians were repeatedly reminded of wartime suffering via graphic illustrations in an effort to keep them from becoming lax about the effort. The U.S. government conducted studies on the effectiveness of propaganda and determined that posters symbolic or humorous in nature elicited a far less powerful response than those with emotional messages and visual elements of photographic quality [source: Powers of Persuasion].

Wartime propaganda didn't die with the end of World War II, though. One more modern take on wartime propaganda involves the Internet and its impact on terrorist activity. For example, Iraqi insurgent groups commonly use the Internet to present their viewpoints and goals to a worldwide audience. Often, these methods are successful in both recruitment and fundraising initiatives. Similarly, propaganda also fuels long-running rivalries between opposing religious and political groups (such as the Shiite and Sunni Muslims) [source: PBS].

For more insight into propaganda, follow the links below.