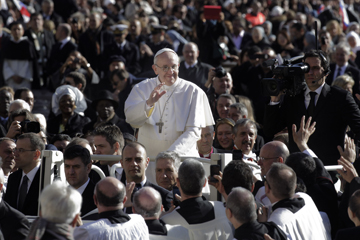 Pope Francis drives through the crowds during his inaugural mass in St. Peter's Square, Rome in 2013.
© Donatella Giagnori/Demotix/Corbis

Worldwide membership in the Roman Catholic Church was an estimated 1.08 billion people in 2010, roughly 15.6 percent of the total world population [source: Pew Research Center]. Catholicism is by far the largest Christian denomination in the world, and more than 75 million Americans belong to the Catholic Church.

Catholics look to Vatican City in Rome, where the pope lives, for their spiritual leadership. The pope is the head of the Roman Catholic Church and the Vatican's head of state. The pope's governance of the Catholic Church is termed his papacy. You often hear the pope called by many other names, including Papa, Vicar of Christ, Holy Father and bishop of Rome.

In this article, we will examine the jurisdiction of the papacy of the Roman Catholic Church, discuss how someone becomes pope and review some of the duties a pope performs.