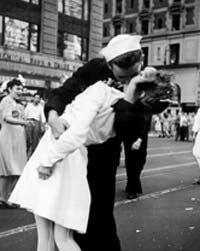 When you really think about it, kissing is pretty gross. It involves saliva and mucous membranes, and it may have historical roots in chewed-up food. Experts estimate that hundreds or even millions of bacterial colonies move from one mouth to another during a kiss. Doctors have also linked kissing to the spread of diseases like meningitis, herpes and mononucleosis.

Yet anthropologists report that 90 percent of the people in the world kiss. Most people look forward to their first romantic kiss and remember it for the rest of their lives. Parents kiss children, worshippers kiss religious artifacts and couples kiss each other. Some people even kiss the ground when they get off an airplane.

So how does one gesture come to signify affection, celebration, grief, comfort and respect, all over the world? No one knows for sure, but anthropologists think kissing might have originated with human mothers feeding their babies much the way birds do. Mothers would chew the food and then pass it from their mouths to their babies' mouths. After the babies learned to eat solid food, their mothers may have kissed them to comfort them or to show affection.

In this scenario, kissing is a learned behavior, passed from generation to generation. We do it because we learned how to from our parents and from the society around us. There's a problem with this theory, though: women in a few modern indigenous cultures feed their babies by passing chewed food mouth-to-mouth. But in some of these cultures, no one kissed until Westerners introduced the practice.

Other researchers believe instead that kissing is instinctive. They use bonobo apes, which are closely related to humans, to support this idea. Bonobos kiss one another frequently. Regardless of sex or status within their social groups, bonobos kiss to reduce tension after disputes, to reassure one another, to develop social bonds and sometimes for no clear reason at all. Some researchers believe that kissing primates prove that the desire to kiss is instinctive.

­ Several other animal species have behaviors that resemble kissing. Many mammals lick one another's faces, birds touch one another's bills and snails caress one another's antennae. In some cases, the animals are grooming one another rather than kissing. In others, they're smelling scent glands that are located on faces or in mouths. Regardless, when animals touch each other in this way, they're often showing signs of trust and affection or developing social bonds.

­ Scientists don't entirely agree on whether kissing is learned or instinctive. There's support for both arguments, just as there's support for the different theories of why people started doing it in the first place. See the next page to learn more.

Do we have to hear the kissing part?

Modern research suggests that just about every culture on the planet kisses. However, anthropologists and ethnologists have described a few cultures in Asia, Africa and South America that do not kiss at all. Some of these cultures view kissing as disgusting or distasteful. However, other researchers point out that these societies may view kissing as too private to discuss with strangers. In other words, they might kiss but not talk about it.