Browse the article How the Patriot Act Works

The Patriot Act is a U.S. law passed in the wake of the September 11, 2001 terrorist attacks. Its goals are to strengthen domestic security and broaden the powers of law-enforcement agencies with regards to identifying and stopping terrorists. The passing and renewal of the Patriot Act has been extremely controversial. Supporters claim that it's been instrumental in a number of investigations and arrests of terrorists, while critics counter the act gives the government too much power, threatens civil liberties and undermines the very democracy it seeks to protect. Let's take a look at what the Patriot Act is, the support and criticism behind it and if the Patriot Act is really working.

Main Provisions of the Patriot Act

The Patriot Act's full title is Uniting and Strengthening America by Providing Appropriate Tools Required to Intercept and Obstruct Terrorism Act of 2001. It's split into 10 parts, and it covers a lot of ground. Here is a summary.

Title I - This section pertains to the protection of civil liberties. It authorizes federal money to accomplish much of the act's provisions and authorizes the Secret Service to create a nationwide electronic crime task force. This section also gives the president the authority to confiscate the property of any foreign person who is believed to have aided in a war or attack on the United States. Such seizures can be submitted secretly to courts as evidence.

Title II - This section broadens the ability of law-enforcement agencies to conduct surveillance on "agents of foreign powers." It allows the interception of communications if they're related to terrorist activities and allows law-enforcement agencies to share information related to terrorist activities with federal authorities. In addition, Title II authorizes roving surveillance -- that is, a court order allowing surveillance on a particular person allows officers to use any means available to intercept that person's communications, regardless of where the person goes. Previously, a court order would only allow a wiretap on a specific line in one location. Further, it allows the government to order files from the providers of communications services with details about specific customers' use of the service. For example, an Internet service provider can be ordered to provide information on IP addresses, login times and sites visited. Title II also allows delayed notification of search warrants, meaning a suspect's house could be searched while the suspect isn't present, and the suspect would not be notified of the search until after it was carried out. The wide-ranging Title II included many other relatively minor clauses. Title II also contained the sunset clause that would have caused many of the act's provisions to expire in 2005 had they not been renewed. We'll discuss more on the sunset clause later.

Titles III-X of the Patriot Act

Title III - This section of the Patriot Act is aimed at cutting off the financial support of terrorist groups. It has provisions requiring banks to take steps to prevent money laundering, allows law-enforcement agencies to gather information from banks and creates longer prison terms for money laundering and smuggling.

Title IV - This section has provisions intended to strengthen border security. It authorizes increased funding for border patrols, customs officials and immigration officials. Foreigners with ties to terrorist organizations are banned from entering the United States, and the monitoring of foreign students is expanded by Title IV.

Title V - The most important part of Title V is the use of National Security Letters (NSL). An NSL is a demand for the release of information and paperwork related to a person under investigation. The Patriot Act makes NSLs much stronger, allows them to be used against U.S. citizens and contains a gag order preventing the target of the NSL from ever knowing about it or telling anyone else about it. There is no judicial review or need for probable cause when an NSL is requested and issued.

Title VI - This section contains provisions for providing financial compensation to victims of terrorism and their families.

Title VII - Authorization and budgeting for increased sharing of information between law-enforcement agencies and jurisdictions are contained in this section.

Title VIII - This portion of the Patriot Act adds several crimes to the list of things considered acts of terrorism, including attacking a mass transit system, using a biological weapon, supporting terrorism and computer hacking. The penalties for terrorist crimes are also increased.

Title IX - This section creates a method for the sharing of national intelligence information between government agencies.

Primary Criticisms of the Act 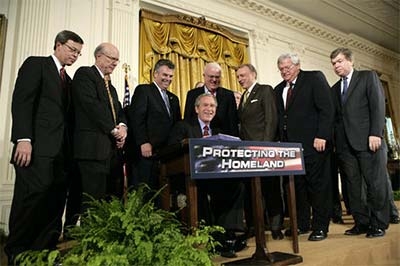 The Patriot Act has come under fire for a number of reasons. It was passed very quickly (just over a month after the September 11, 2001, terrorist attacks), and Congress spent very little time reading and debating it. By some accounts, less than 48 hours passed between the presentation of the bill’s final wording and the law passing in both houses of Congress, leading to some doubt whether many members of Congress actually read the lengthy and complex bill. However, Sen. Russ Feingold, a Democrat from Wisconsin, was the only senator to vote against the act, while several members of the House of Representatives joined his dissent or abstained from voting. Critics contend that such a crucial and sweeping piece of legislation deserved more thorough deliberation.

There are fears that the Patriot Act reduces or removes many of the civil liberties enjoyed in the United States and guaranteed by the Constitution. The right to privacy (not specifically mentioned in the Constitution but supported by numerous Supreme Court decisions) and freedom from unreasonable searches and seizures are the most notable infringements due to the expansion of the government’s ability to conduct wiretaps, obtain NSLs and perform searches without notification. The detainment of material witnesses and terrorist suspects without access to lawyers, hearings or any formal charges are seen as erosions of the Fifth and Sixth Amendments, rights of due process and trial by jury, respectively.

Critics also charge that the Patriot Act unfairly expands the powers of the executive branch and strips away many crucial checks and balances. The lack of judicial review, or secretive reviews subject to strict gag orders are the key elements of this criticism. There are also fears that the law will be inappropriately used against non-terrorist criminals. In fact, it’s been used to remove homeless people from train stations, to pursue drug rings and to collect financial data on random visitors to Las Vegas [Soure: Firstamendmentcenter.org, New York Times and Business Week].

The results of an internal FBI audit were released in 2007, revealing that the agency had misused National Security Letters in more than 1,000 instances since 2002. It’s likely that this number represents only a fraction of actual number of NSL abuses [Source: The Washington Post].

A Brief History of the Patriot Act 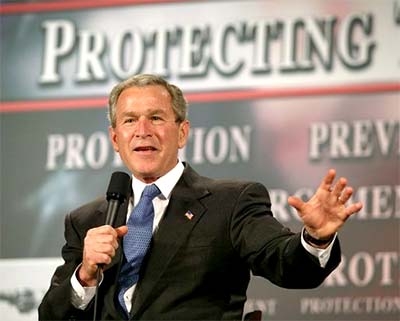 President Bush speaks about the Patriot Act in 2004.
Photo courtesy of The White House

The terrorist attacks on the World Trade Center and the Pentagon on September 11, 2001, spurred a nationwide desire for tighter security and increased abilities for law-enforcement agencies to track and stop terrorists. The Patriot Act was drafted in response and introduced to Congress by Republican Rep. Jim Sensenbrenner. Assistant Attorney General Viet Dinh was the primary author of the act, following his review of Department of Justice practices and procedures in the wake of the September 11 attacks [Source: Wired.com].

The original act has a sunset clause which would have caused many of the law’s provisions to expire in 2005. By then, opposition to the act had grown and Democrats used a filibuster to delay reauthorization. The sunset clause was extended for several months, but increased Democratic power in Congress forced a compromise, and the act was reauthorized in early 2006 with a series of “civil liberties safeguards” in place [Source: CNN]. Most of the act’s provisions were made permanent, but many were changed and three of them were not made permanent. Libraries will no longer be subject to National Security Letters (unless that library also serves as an Internet Service Provider). Provisions allowing roving wiretaps and FBI seizure of business records are set to expire in four years [Source: The Washington Post].

The gag order on NSLs and other subpoenas was extended to one year, but the recipient is allowed to challenge the order after that time has passed. Targets of NSLs are allowed to keep the identity of their attorney from government officials. Other changes limit the length of time the FBI can hold records and force government officials to provide more thorough explanation of their reasons for requesting search warrants, surveillance or subpoenas [Source: NPR].

A bill known internally as the Domestic Security Enhancement Act, but often referred to as Patriot Act II, was drafted by the Department of Justice but never submitted to Congress. A leaked copy of the draft showed that this bill featured harsh restrictions on civil liberties and vastly expanded government powers.

Is the Patriot Act a Success or a Failure? 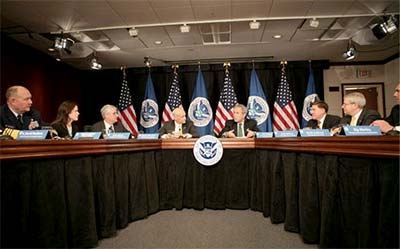 President George W. Bush and the Department of Homeland Security discuss the war on terror.
Photo courtesy of The White House

The Patriot Act works on the theory that in the face of terrorist threats, Americans must balance freedom with security. The balancing act only works if the measures taken to increase security actually accomplish that goal. By one very significant measure, it could be argued that the Patriot Act has worked -- there has not been a successful terrorist attack on U.S. territory since the act was signed into law (the Anthrax scare that followed in the months after September 11 was never determined to be a terrorist attack). Of course, that could also be attributed to increased airport security, heightened awareness on the part of all Americans or the diversion of terrorist resources to conflicts in the Middle East.

The Department of Justice lists many general ways in which the act has helped the country fight terrorism, and one conservative analyst claims that 15 terrorist plots have been disrupted by agents using powers granted by the act [Source: Lifeandliberty.gov]. The Department of Justice document specifically cites the use of roving wiretaps, expanded surveillance authorization, delayed-notification searches and interagency information sharing as crucial to the anti-terrorist mission.

In some cases, critics of the Patriot Act have taken their opposition to court or written it into law. An unnamed plaintiff sued Attorney General John Ashcroft with the help of the American Civil Liberties Union over a National Security Letter. A federal judge ruled that the recipient of an NSL has the right to contest it; the ruling automatically applied to all NSLs, deeming them an unconstitutional restriction on free speech [Source: ACLU]. In a separate case, a judge ruled that a clause of the Patriot Act making it a crime to provide aid to a terrorist group in the form of expert advice was unconstitutional. The judge believed the law was needlessly restrictive of speech and illegally vague by not defining what would constitute expert advice [Source: ACLU]. By 2004, almost 300 municipalities across the United States had passed local legislation formally disagreeing with the Patriot Act or urging Congress to modify or repeal it. One town, Arcata, Calif., passed a law making it a criminal offense to comply with those sections of the Patriot Act the town considers unconstitutional [Source: The Boston Globe and The Washington Post].

For more information on the Patriot Act and related topics, check out the links on the following page.