What the Skeptics Say about Oak Island 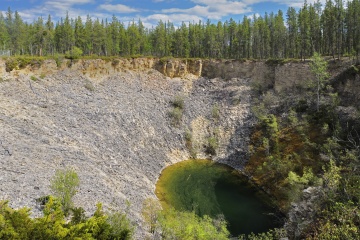 We've already mentioned the questions surrounding the early accounts of Daniel McInnis and his discovery of the Money Pit. Skeptics point to several contradictory versions of the original story concerning what McInnis found. Also, no written documentation exists regarding the excavations at Oak Island until 1849 [source: Joltes]. Early accounts of the pit mention some platforms near the surface, but not the fabled idea of platforms every 10 feet exactly [source: Joltes].

As for the discoveries allegedly unearthed, many have been lost, such as the inscribed cipher stone and links of gold chain. The inscribed stone disappeared around 1919, and neither rubbing nor photograph of the stone is known to exist. One can find depictions of the original cipher in books and websites, but skeptics believe these are unreliable approximations from memory or completely fabricated. Skeptics say the piece of parchment and other discoveries still around today were likely hoaxes that diggers planted on Oak Island hoping to convince investors to send more money.

Most skeptics contend that the Money Pit itself is really a natural sinkhole. They point out that other sinkholes have been discovered on the mainland of Nova Scotia that bore a resemblance to the Money Pit. The mainland has also been found to have natural underground caverns, dispelling claims that diggers have found man-made caverns near the Money Pit.

In 1878, Sophia Sellers sank into the ground while plowing a field between Smith's Cove and the Money Pit. While treasure hunters believe this is evidence of a man-made tunnel or booby trap underground, skeptics take this as evidence that sinkholes are natural to the island.

Skeptics have had a harder time explaining certain discoveries, like the finger drains at Smith's Cove, but they do point out excavations have revealed it to be a dead end [source: Joltes]. One skeptic, Joe Nickell, said that, while he believes the Money Pit itself is a natural sinkhole with no treasure, there's enough evidence to believe that Oak Island has been the site of elaborate Masonic rituals [source: Nickell].

Plenty still believe treasure is to be found under the earth on Oak Island, however. The island has such a captivating effect on treasure hunters that they will dedicate their lives to solving the mystery. Mildred Restall recognized this, saying, "Tell [men] a tale a of treasure hunting and there they sit, absolutely spellbound; but long before you get to the end of your story you will find that you have lost them. They have gone into a dream world all their own" [source: Fanthorpe et al.].

I've always been a fan of the "Indiana Jones" movies, and I think there's a reason they resonate with so many people. There's something captivating, romantic and adventurous about hunting for valuable ancient artifacts. Firstly, everyone is familiar with the thrill of discovering something of value that had been lost — whether that's a $20 bill in your old jacket or an old, forgotten family photograph. There's also a human tendency to become obsessive over finding something that's missing. The Oak Island mystery feeds so well into these human tendencies. There's just enough intriguing evidence to allow oneself to get sucked in. The hard part for some is to not get obsessed to the point of ignoring reason.