Discoveries on Oak Island Since the 1960s 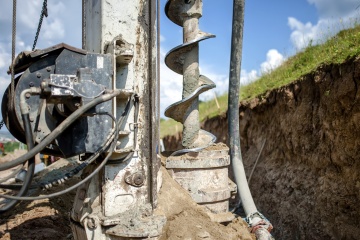 Drilling down into the Money Pit has revealed tantalizing clues but no definite answers.
Bogdanhoda/iStock/Thinkstock

Robert Dunfield dug out the Money Pit to a width of 100 feet and a depth of 140 feet [source: Polsson]. He kept most of his findings secret, and they didn't become public until 2003 [source: King]. Supposedly sifting through the dirt turned up only pieces of porcelain dishware, which dated to the early 1600s. Dunfield's machinery often broke down, and the sides of the Money Pit continually collapsed thanks to heavy rain. Finally resorting to drilling, Dunfield confirmed evidence of a cavern under a layer of limestone originally discovered by earlier explorer George Greene. In his determination, Dunfield unfortunately demolished many landmarks on the island, frustrating future treasure hunters' attempts to identify the exact location of the Money Pit.

In 1970, the Triton Alliance, consisting of David Tobias and Dan Blankenship, commenced work on the island. Finding tunnels that were thought to be natural to the island, the workers lowered a camera into Borehole 10x, located 140 feet northeast of the Money Pit. The water was so muddy and murky that visibility was almost nil. But in the grainy footage, treasure hunters believed they saw evidence of potential treasure chests and human remains. Dan Blankenship himself dived into Borehole 10x and believes he saw a human hand.

Meanwhile, Frederick Nolan, a professional surveyor and treasure hunter who purchased several plots on the island, revealed in 1981 that he had discovered five large cone-shaped boulders. These boulders, when observed from above, seemed to be positioned to form a cross on the island. The boulders also intersected a point where Nolan claims he discovered a buried stone in the shape of a human head. This mysterious formation is now known as "Nolan's Cross."

Dan Blankenship continued work on the island for the ensuing decades, finally handing the torch to Rick and Marty Lagina, who are the subject of today's reality TV series about the exploration. The Lagina brothers have utilized modern metal detection technology and sonar to search deep underground. So far they have discovered old coins and sonar evidence of a chest that has encouraged them in their search. In addition, they believe they have located the original Money Pit.