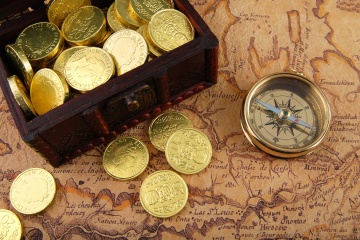 Theories abound as to what could be buried in Oak Island's "Money Pit."
Filip Fuxa/iStock/Thinkstock

"Just mention the word treasure to some men and right away their eyes gleam." This line was written by Mildred Restall, a woman who knows something about treasure hunting [source: Fanthorpe et al.]. In 1959, her husband, Robert, brought her and their children to Oak Island, off the coast of Nova Scotia, to pursue a mysterious treasure. By the time the Restalls came to the island, two men had already died looking for treasure there. After six years of searching on the island, Robert passed out from a gas leak and fell into a shaft. Robert perished, along with his son and two friends while attempting to save him.

These tragedies haven't stopped treasure hunters from all walks of life from coming to Oak Island to search for treasure – a treasure that no one has yet found, and no one can be sure exists.

Otherwise unremarkable, Oak Island is a mere 140 acres. The saga allegedly begins in 1795 when a teenage boy, Daniel McInnis, was exploring the island and discovered a tackle block (part of a pulley system) hanging from the limb of an oak tree. Below the tackle block was a noticeable depression in the ground. This was enough to encourage young Daniel to dig, believing it was possible that pirates had chosen this spot for buried treasure.

What he found, and what others have found after him, has amounted to a fascinating mystery. The story convinces many would-be adventurers that some sort of treasure lies beneath the ground on Oak Island. Theories abound: Some believe it's pirate treasure, others conjecture it's Marie Antoinette's jewels, and still others say it could be the original manuscripts of Shakespeare's plays. Some believe it's connected to the notoriously secretive Freemason fraternal organization. And you'll even find those who are convinced that the Holy Grail and the Ark of the Covenant are buried on Oak Island. Today, a reality TV series entitled "The Curse of Oak Island" follows modern treasure hunters and hypes the idea that the island and its alleged treasure are "cursed."

Have we lost you yet? You're not alone. Skeptics abound, too. To them, the site McInnis found was simply a sinkhole, and any interesting discovery can be explained away or has merely been a hoax.

We'll discuss what people have found on Oak Island, and you can decide for yourself whether the claims of treasure are bona fide or bunk.