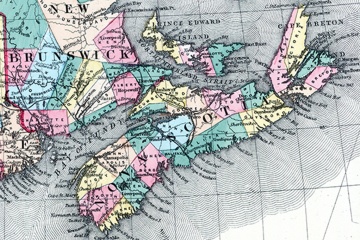 While the California gold rush drew thousands hoping to strike it rich, a tiny island off the coast of Nova Scotia was attracting its own group of gold diggers.
Historick Map Works LLC/Getty Images

In 1849, while gold rushers were flocking to California, the Truro Company came to the Money Pit to begin anew. After digging to 86 feet, they awoke to find the pit filled with water. So, they decided to drill down to see whether they could find verifiable evidence that something was buried. Supposedly, the drilling revealed various layers of spruce, empty space, oak, "metal in pieces" and clay [source: Fanthorpe et al.].

When the drill returned from the clay, the drillers allegedly found several links of gold clinging to the clay left on the auger. This encouraged them to attempt another tunnel to the treasure, but again they were flooded when attempting to connect it to the Money Pit. At this point they realized this was salt water flooding the pits, and that the water rose and sank with the tides.

Believing now that the flooding tunnels were connected to the sea, men scoured the island's shores. At an area known as Smith's Cove, they found a fascinating structure. The company built a temporary dam, called a cofferdam, to uncover a large overlay made of coconut husk, 145 feet wide and the length of space between low tide and high tide. Underneath the coconut husk was a layer of beach stones five feet deep. Beneath the beach stones were five finger-drains constructed of flat stones, converging into a single drain. The coconut husk worked as a barrier against sand to allow water into the drains.

However, soon after the company found the mysterious finger drains, a storm hit and destroyed the cofferdam. The company then decided to dig shafts between Smith's Cove and the Money Pit in an attempt to intercept and divert the seawater away from the Money Pit. However, after failing to reach water in this shaft, and after digging several more, the company ran out of funds and gave up.