Myths and Theories About Oak Island 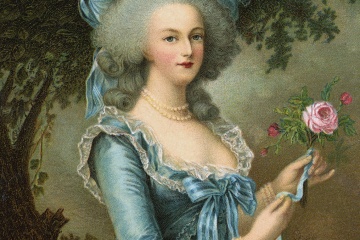 One theory is that Marie Antoinette's jewels are hidden beneath the mud of Oak Island.
GraphicaArtis/Archive Photos/Getty Images

In addition to the latest reality series, there are scores of magazine articles and books about Oak Island. These include historical fiction books that depict explanations for the mystery. The enigma of the island spurs many to speculate about what the treasure could be and new ways to approach the problems plaguing treasure hunters.

Of course, one popular theory is that pirates buried the treasure. According to one account, the infamous Captain William Kidd buried his treasure "east of Boston" [source: Conlin]. Others believe the complicated structure of Oak Island's treasure pit is beyond the capabilities of a pirate and his crew. Instead, a government body could have orchestrated the puzzle. For instance, during the French Revolution, Marie Antoinette supposedly entrusted her jewels to a woman who was reportedly seen later in Nova Scotia. So, some conclude that the French Navy could have been responsible for burying her jewels on Oak Island [source: Fanthorpe et al.].

Another theory revolves around Francis Bacon, a brilliant Renaissance man who was a contemporary of Shakespeare's. Some believe Bacon was the true author of Shakespeare's works and buried the original manuscripts in Oak Island. These theorists point to evidence that he was interested in ciphers and secret chambers, he owned land in Newfoundland and he knew how to preserve documents with mercury (flasks of which were supposedly found on the island) [source: Atherton].

Others adhere to the legend that the Knights Templar buried treasure on the island. As a military and religious order formed in the 12th century to protect pilgrims in the Holy Land, the Knights Templar accumulated vast wealth in donations and are said to have possibly found the Holy Grail or even the Ark of the Covenant. After having fallen out of favor with the Catholic Church, however, they buried their treasure in a secret location, according to legend.

What compounds people's interest in this Knights Templar theory is the connection to the Freemasons, a secretive fraternal order that adopted the Knights Templars' symbols and rituals. Some say the island is riddled with symbolism associated with Freemasonry, such as the cipher stone, the triangle of beach stones and Nolan's cross. Theorists also point out that several treasure hunters on Oak Island were also Masons, including Frederick Blair, William Chappell, Gilbert Hedden, Edwin Hamilton and even FDR [source: Nickell].