The First Excavations at Oak Island 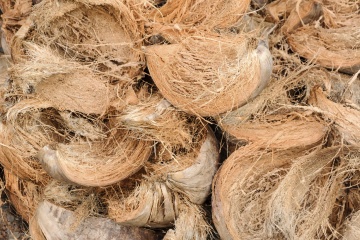 In the late 18th century, treasure hunters found coconut fiber in the Money Pit – even though the nearest coconut tree was thousands of miles away. Could it be a clue?
eggman555/iStock/Thinkstock

We've already mentioned young Daniel McInnis's discovery. But in truth, nearly every detail of this early account is debated, including the spelling of his name, his age at the time of discovery, whether he was originally drawn to the island by observing lights, and whether he discovered a tackle block or a sawn-off tree limb. The questions multiply when considering what McInnis and others allegedly found on Oak Island.

The following is a general folklore version of what happened according to Bobby Restall, Robert's son. McInnis and two friends started digging and found a layer of flat stones two feet down. At 10 feet down, the friends found a layer or platform of oak logs. They found two other such platforms at 20 and 30 feet down. Although convinced this was a man-made pit, the men realized they needed help to continue. They refilled the pit, later known as the "Money Pit," and didn't return until nine years later, when they got together with other investors and formed the Onslow Company, so they could come back to the Money Pit with manpower and machines.

While digging, the team found charcoal, coconut fiber and putty. Coconut fiber was an especially surprising discovery, as coconut isn't native to Nova Scotia or anywhere near it, but the fiber was commonly used on ships as a packing material. The group of treasure-seeking friends also struck oak platforms every 10 feet until at last, at 90 feet, they found a flat stone with an encoded inscription they couldn't read at the time. They continued digging.

At 98 feet, they hit another oak platform and quit work for that day. By morning the pit was half filled with water. Bailing and pumping the water was fruitless, and the team had to give up. Supposedly, the discoverers soon brought the stone to a professor in Halifax, who claimed the inscription on the stone read, "Forty feet below two million pounds are buried" [source: Fanthorpe et al.]. The company returned the next year to tunnel under the Money Pit, but they hit water again when tunneling.

Was this a natural channel of water or had the diggers hit an engineered booby trap? Treasure hunters still debate this. The next discovery happened more than four decades later.