How Big is This Problem, Anyway? 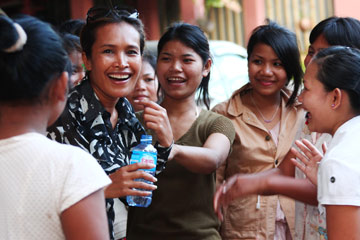 Somaly Mam (holding water bottle) has become known worldwide for her work with trafficking victims in Cambodia. Mam is a survivor of sex trafficking.
Getty Images

It will never be easy to estimate how many victims of human trafficking exist at any given time; after all, if officials could figure out where the slaves are kept in order to count them, then they could shut down the traffickers and free the prisoners. And while no one seems to be arguing about ending human trafficking, there's quite a lot of heated discussion over just how big the problem is. According to the U.S. State Department's 2010 Trafficking in Persons Report, 12.3 million adults and children are in forced labor situations or experiencing sexual exploitation [source: U.S. Department of State]. In 2009, however, there were just 4,166 successful trafficking prosecutions. This disparity raises the question of whether enforcement officials are looking hard enough for trafficking victims -- or whether there aren't that many trafficking victims to find.

In 1999, officials told Congress that 50,000 slaves were brought into the United States each year; the number was based on an estimate by the Central Intelligence Agency [source: Markon]. Many aid groups joined the charge for fighting slavery in the U.S., especially Christian ones, and these groups urged President George W. Bush to make the fight against trafficking a policy priority. But even with vast resources, prosecutions against traffickers only amounted to a few hundred cases.

In 2004, the official estimate of slaves coming into the U.S. was changed from 50,000 to somewhere between 14,500 and 17,500, and even that number was deemed too high. The same year, when New York Times reporter Peter Landesman claimed that at least 10,000 slaves are brought to the U.S. each year, it caused a firestorm of controversy, as critics questioned this number as well [sources: Landesman; Shafer]. While stopping human trafficking is a no-brainer cause, some are starting to wonder if it's worth the money that the U.S. in particular is throwing at it.

But of course, there are others who say that it doesn't matter what the number is -- if there are any slaves at all, we must work to eradicate human trafficking, particularly if the U.S. wants to remain a signpost of human rights in the world. On the next page, we'll take one last look at how slavery in the world might be eliminated.