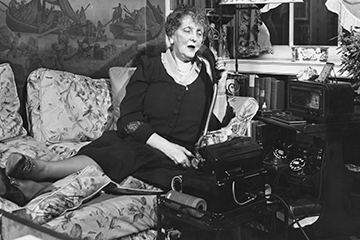 Emily Post was not afraid to change with the times. In addition to continuing her etiquette writing career, she also nabbed spots on the radio and in magazines.
Bettmann/Corbis

The name of Emily Post quickly became synonymous with etiquette, and she rode this success for the rest of her life. Three years after "Etiquette" came out, she published a society novel, "Parade." The book's advertising campaign focused on Post's experience as a manners expert. But this would be her final foray into fiction, as she realized that people were much more interested in her advice on manners.

As she was working to revise and update "Etiquette" in 1927, tragedy struck. Emily's son Bruce complained of a stomachache, but he refused to see a doctor. Once she finally convinced him to go to the hospital, he died of a ruptured appendix just a few weeks after his 32nd birthday. In her grief, she kept herself busy, however. She threw herself into work on a textbook of architecture and became an avid gardener.

Her revision of "Etiquette" appeared later that year and included some interesting concessions. In the original edition, she explained that chaperones actually allow young women to be more "free." But in the first revision, she succumbed to the new practice of allowing women to go out alone with a man. Furthermore, she realized that much of her readership was "servantless," and she devised "Mrs. Three-in-one," who must play the hostess, the cook and the waitress.

The next year, Post came out with a new book, but this time anonymously. "How to Behave Though a Debutante" was a parody about Muriel, a modern young girl. Muriel is an independent, empowered young woman who discusses sex openly. The point of the book was to encourage the older generation to respect the younger generation and accept change [source: Claridge]. Publishing anonymously allowed readers to approach the book without false expectations. Reviewers called the book "brazenly unconventional." Post surprised all her readers when she came out as the author a few months later.

The compendium on architecture she began in the wake of her son's death, "The Personality of a House," didn't come out until 1930 — the year after the stock market crash, harbinger of the Great Depression — so it enjoyed only modest sales. Two years later, she secured a deal for a daily syndicated column, "In Good Taste," that would appear in nearly 200 newspapers [source: Claridge]. She also became a popular radio personality in the 1930s, negotiating a contract for a weekly national radio program.

In 1950, "Pageant" magazine listed Post as second only to Eleanor Roosevelt in the list of "most powerful women in America" [source: Claridge]. Before her death in 1960, Post's "Etiquette" would undergo 10 updates and 90 printings [source: Encyclopedia Britannica].

The Emily Post Institute, which she herself founded in 1946, continues today with involvement from her descendants. They carry the torch of helping people learn etiquette and navigate social situations with a focus on courtesy to others.

What impressed me most about Emily Post was her emphasis on combining good character and knowing the rules of etiquette. Good intentions are essential, yes, but they aren't everything. Good intentions can't tell you how to act in every situation. Furthermore, someone from a completely different background could take offense at what was meant to be a kind act. Establishing a cultural etiquette — even if it's a flexible and changing etiquette — is necessary for society.