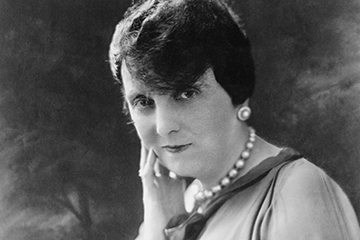 No Edwin, no problem. Emily continued her writing career, enjoyed her inheritances and road-tripped with her sons.
Bettmann/Corbis

Emily Post did well on her own inheritances and didn't struggle financially, which allowed her to pursue her passion of writing. She would go on to publish another novel soon after her divorce scandal. "Purple and Fine Linen" came out in 1906 to positive reviews, but two years later, "Woven in the Tapestry" failed to impress readers and reviewers. Her next, more successful novel, "The Title Market," was about marriages between the European titled class and American rich, just like her own.

While riding on this success, Emily kept busy writing articles in the "Delineator," including "What Makes a Young Girl Popular in Society." In this not-quite-hard-hitting piece, she explains the importance of "radiance" and "happiness," which can help make up for a lack of money, social position or natural charms [source: Claridge]. In 1911, another novel, "The Eagles' Feather," came out to mixed reviews. Later that year, she published articles on planning expenses for a baby and one about Tuxedo Park, the resort village her father helped establish.

Around this time, she asked her agent to secure her a job writing for "Ladies Home Journal," but he told her they'd recently filled the position. He went on, "I do not know if you would have liked running such a thing ... Writing and deciding what kind of finger bowls people ought to have on their table when they give a luncheon, gets after a while, I think, to be a very tiresome pursuit."

She wrote "The Curse of the Calico Girl," which was serialized in 1914. She was disappointed that it wasn't picked up for publishing in book form like her other novels. But instead of wallowing, she chose to join her young adult sons who were embarking on a road trip in Europe. In April, Emily continued her adventures on the road — this time with son Ned, as they began an American cross-country road trip on the new Lincoln Highway. The primitive automobiles and highway made for a difficult but adventurous journey. Emily's biographer Laura Claridge writes, "The forty-five-day trip during one of the wettest springs on record would prove seminal to the writer's psychological maturation, enhancing her ability to look beyond what she already knew."

The magazine "Collier" asked her to log her experiences, which culminated in articles and a book titled "By Motor to the Golden Gate." But sales were unimpressive both because the public was already tired of the subject of cross-country motorists and because of the preoccupation with the European war. When the United States did get involved in the Great War, Emily, like most ladies, was concerned with charity work. Luckily, after the war, her boys would return home safe. But the country was changing.