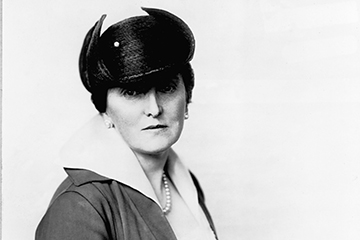 As her marriage to Edwin fell apart, Emily picked up her pen and became a writer.
Historical/Corbis

The Posts would go on to have two boys, Ned in 1893 and Bruce in 1895, but they didn't experience marital bliss. Part of the problem was that Edwin was a passionate sailor and spent most of his time on his boat, but Emily was prone to seasickness and didn't accompany him. And they soon found they were incompatible in more ways than one. Bruce once wrote he'd "committed matrimony" and was thus "sentenced to life for it" [source: Claridge].

Emily's beloved father passed away in 1903. On his deathbed, he encouraged his daughter to pursue her passion of writing. Over the next year, she immersed herself in writing her first novel, "The Flight of the Moth," which was published the next year in serial form and later as a book. Encouraged by sales and good reviews, Emily Post set to work on her next novel.

Meanwhile, as Emily's career began to take off, her marriage continued to crumble. She and Edwin had been emotionally distant for many years, and Emily had either knowledge or strong suspicions of her husband's various infidelities. One affair in particular would lead to public scandal in 1905: Edwin had broken off a relationship with a young actress, and to regain his affection, the actress returned to the cottage he kept for meeting his mistresses. Edwin scorned her advances, and she sought revenge by contacting the office of Col. William d'Alton Mann, a gossip journalist and Civil War soldier [source: Claridge].

Col. Mann was no stranger to scandal. Having run several blackmail schemes, he'd developed a pattern of demanding money in exchange for keeping secret the love affairs of high-powered businessmen. Later, Mann would defend his scheme saying that he sought to make the "Four Hundred ... disgusted with themselves" [source: Kolbert].

Edwin was already familiar with the scheme before he became a target himself, and he was prepared. Instead of acquiescing, he was determined to make a hero of himself and expose the blackmailers. He set up a sting to have the blackmailers arrested, and his colleagues congratulated him for it. But in so doing, Edwin exposed his infidelity and humiliated Emily as the story and subsequent trial made headlines for months to come [source: Claridge].

The way Emily would later portray the events, she and Edwin mutually agreed to heroically expose the blackmailers. But, according to Emily's biographer, Laura Claridge, Emily was actually not involved in the decision, and Edwin merely warned her of what was to happen. Claridge explains that Emily's version of the story was an attempt to cover up Edwin's failure to protect his own wife from scandal.

The Posts announced their divorce the next year.