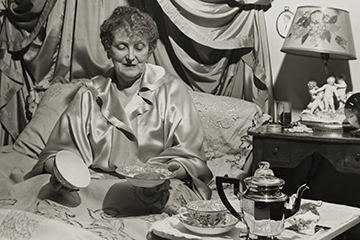 The great thing about Emily Post was that, while she was the queen of etiquette, she remained open-minded -- and enjoyed meals in bed. Celebrities: They're just like us!
Bettmann/Corbis

In her book, Emily Post performs an exhaustive discussion of etiquette, including everything from proper introductions, conversation, and diction to visiting cards and invitations and how to keep a presentable house. The reader learns one should generally introduce a younger person to an older person, but a gentleman is always presented to a lady. And one shouldn't put on airs by using erudite words like "converse" instead of "talk." Nevertheless, you shouldn't say "phone" instead of "telephone." Houses reflect the charm of their owners, Post argued, and even people of modest income can be respectable members of "Good Society" if they keep a neat home.

She also discusses the roles of various servants. The role of a parlor maid, for instance, includes keeping the library and drawing room in order, in addition to assisting the butler with waiting and dishwashing. This is in contrast to a lady's maid, of course, who is in charge of the lady's clothes and hairdressing.

Post discusses the minutia of how a lady sits gracefully — centered in a chair, legs together even if crossed. And she tells us in what kinds of elevators a man must remove his hat when in the presence of a lady — specifically those located in hotels, clubs and apartments, but not necessarily those in offices or stores.

The reader learns how to host tea, a formal dinner party and even a wedding. Some of this advice is still the standard today, such as the etiquette of thank-you notes (prompt and hand-written by the bride herself), as well as who chooses the bridesmaids' dresses (the bride) and who pays for them (the wearers).

When it comes to clothes, a pleasing appearance is on par with good manners. Post encourages the reader to learn what latest fashions work for him or her. One shouldn't be like "sheep" and follow each new fashion blindly. But Post doesn't approve of "frumps" or "dowds" who make no attempt to keep up with fashion.

Post might have fallen into obscurity like her predecessors had it not been for one innovation to the genre of etiquette manuals: characters. Post drew on her personal knowledge of real families and her experience writing fiction to incorporate such characters as the Worldlys, the Kindharts, the Gildings, the Wellborns and the Toploftys. This technique served to both illustrate hypothetical situations and allow her readers a glimpse into high-society personalities.