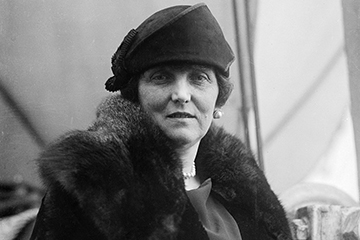 Emily spent two year working on her 619-page tome on etiquette. It would make her a superstar.
Bettmann/Corbis

Despite the fame she would receive as an authority on etiquette, Emily Post was slightly embarrassed about it. The way Emily would later tell the story, her publisher kept pushing her to write about etiquette until she finally relented. In reality, however, she sought out the assignment. Her agent had originally discouraged the subject as beneath her. Truthfully, she probably would've preferred to be an authority on a more serious matter, but she recognized deep down that America would welcome her expertise on such "trivial" matters as which fork to use. And she was right.

When she finally secured a deal to write a book on etiquette, Emily devoted herself to the project for two years starting in 1920. Her sons, meanwhile, remained understandably skeptical about the project. They thought she was hopelessly out of touch if she believed she would find success selling etiquette rules to an irreverent public [source: Claridge].

Although she originally intended the book to be short, the project proved to satisfy her love of meticulous organization and note taking, and she continued to find more social situations to write about. She didn't pretend to be an expert in every situation, so she sought out the advice of friends and family (or even strangers on the street) and polled their opinions of the details of etiquette. Otherwise, she was largely removed from public life and spent all of her time working on the book.

The result was a 619-page tome entitled, "Etiquette: In Society, in Politics, in Business and at Home," which cost $4 (about $44 today) [source: Claridge]. Despite its length and price, the book was quickly popular. After steadily climbing the charts on the "Publisher's Weekly" non-fiction best-seller list, it reached the top of the list eight months after it came out.

And it's not like it didn't have competition. Lillian Eichler, a young copywriter, had recently updated an older authoritative volume: the "Book of Etiquette" by Emily Holt. Assisting Eichler's sales was an advertising campaign in the form of cartoons in which characters embarrassed themselves by not knowing proper manners. Emily, on the other hand, eschewed shaming people into etiquette. She much preferred to lift people up, empowering them with the tools needed to operate in "good society." This was part of her appeal.

On the question of which fork to use, Emily Post claimed, "the choice of an implement is entirely unimportant — a trifling detail which people of high social position care nothing about." She also claimed that she often chose the wrong fork and was even known to put her elbows on the table.