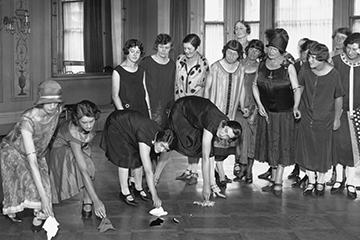 Manners matter, but being considerate of others was the most important thing to remember, according to Post. Her attitude kept her ideas relevant among the younger generation, several of whom are seen here learning the proper way to pick up a hanky.
E Bacon/Hulton Archive/Getty Images

In the first chapter of her book, Post quickly earns the respect of her middle-class readers, assuring them that etiquette can allow anyone into "Best Society."

"Best Society is not a fellowship of the wealthy, nor does it seek to exclude those who are not of exalted birth; but it is an association of gentlefolk, of which good form in speech, charm of manner, knowledge of the social amenities, and instinctive consideration for the feelings of others, are the credentials by which society the world over recognizes its chosen members."

Amidst all the formal rules, Post continually reminds readers of what's really important: "Again, good manners are, after all, nothing but courteous consideration of other people's interests and feelings." She also emphasizes that we must treat others with this courtesy, "no matter what the station of the others may be."

Post shared with the younger generation an appreciation of core values over appearances, saying, "Certainly what one is, is of far greater importance than what one appears to be." She explains what she learned painfully through her unhappy marriage: A man is not a gentleman if he does not live up to a code of honor, which is "more important than any mere dictum of etiquette."

Throughout her book, Post often turns the table on the upper class, demanding they show mercy on those who try and fail to live up to their high standards of decorum. While discussing how to be a good guest, Post advises, "you must learn as it were not to notice if hot soup is poured down your back." And the characters of the Kindharts sweetly disregard the Newweds' disastrous dinner party, saying, "Cheer up, little girl, it doesn't really matter!"

Despite all her meticulous guidance on behavior and fashion, Post closes her book with an open-minded reflection on generational change. She recognizes the cyclical nature of trends and is careful not to condemn the customs of the new generation as being too loose.

With her emphasis on good character and authentic consideration for the feelings of others, Post managed to win the respect of the younger "Roaring '20s" generation. This suggests that not all young people of the day were as irreverent and carefree as commonly thought, but that they merely rejected the hypocrisy and pretensions of the older generation. Post gave them the direction they needed to separate the wheat from the chaff and hold on to what was good about the past. She taught them that appearance and manners, though less important than good character, are not inconsequential. Indeed, for Post, appearance and manners help express good character.