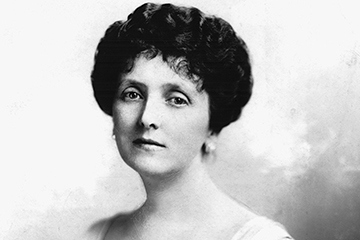 Born into a wealthy family, Emily ended up marrying a cad who was below her station but had a solid lineage.
Historical/Corbis

Emily Post had the advantage of being born into a rich family. Her father, Bruce Price, was establishing himself as a prominent architect in Baltimore, and her mother, Josephine Lee Price, was an heiress to a coal fortune. Emily also had deep American roots as a descendent of Francis Scott Key on her father's side and of pilgrims who sailed on the Mayflower on her mother's side.

Emily Price was born in Baltimore on Oct. 27, 1872 (though this date is disputed). Besides a brother who died in infancy, Emily grew up as an only child. When she was 5 years old, her family moved to New York City. Although they had money, they were not among the so-called "Four Hundred," a fabled list of the elite upper crust of society that could boast aristocratic lineage and old wealth. Nevertheless, Bruce and Josephine managed to wedge their way into "good society."

Emily attended "The Misses Graham's Seminary for Young Ladies," a finishing school, for six years. Although this is surely where she learned much of the social wisdom she'd eventually bestow to others, the future etiquette queen didn't particularly excel. Later, she admitted she wasn't a very good student; rather, she attributed her intelligence and education to her father, to whom she was entirely devoted.

Starting in 1885, Bruce Price built four cottages in Tuxedo Park, a new summer resort village 40 miles north of New York City. The Prices used one cottage and rented out the others. According to Emily's biographer, Bruce Price's cottages are his "greatest legacy," and they are said to have influenced even architect Frank Lloyd Wright [source: Claridge]. Soon, several elite families spent part of the year in the village. The planned community eventually became the year-round residence for many families, including Emily herself after she got married.

In December 1889, 17-year-old Emily Price "came out" at her debutante ball and dazzled the other attendants by performing the elaborate dances required of her. Just as she hoped, she met her future husband, Edwin Post, at the ball, and they married three years later in 1892. Emily's father wasn't thrilled about Edwin's financial prospects, but the young man did come from prestigious Dutch ancestry. Her marriage to Edwin was an example of the popular practice among the upper classes in which one spouse contributed lineage and the other new money.