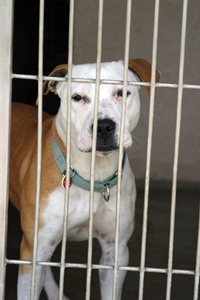 The effects of dogfighting are widespread and go beyond brutality to animals. As in many illegal gambling operations, dogfighting attracts other crimes, notably drugs, money laundering, racketeering and illegal firearms. A sheriff’s officer in Ohio said that 64 out of 65 dogfighting raids he had conducted also revealed drugs [Source: The Arizona Republic]. In the case of NFL star Michael Vick, law enforcement officers discovered signs of dogfighting at the quarterback's property in Virginia as a result of a drug investigation. Theft is a frequent occurrence as handlers steal animals to use them as bait in training their dogs. Research also shows that dogfighting and pet abuse are linked with spousal and child abuse [Source: The Humane Society of the United States]. With thousands of dollars in cash at stake, many participants bring guns to protect themselves or to threaten others.

Dogfight sp­ectators often bri­ng children to matches, which results in these children growing up in a culture where violence is accepted and celebrated. Some gangs even use dogfighting as a way to indoctrinate young recruits, giving them a pit bull puppy to train. Research shows that certain elementary school children have been exposed to dogfighting or already have experience running their own fights [Source: Animal Legal & Historical Center, Michigan State University of Law

Experts say that many people turn to dogfighting because they find in it the respect, acceptance, power or success that’s not available to them in their day-to-day life. these are precisely the reasons cited for why people join gangs, perhaps indicating why dogfighting has risen in popularity among urban gangs.

In and of themselves, fighting dogs, though often chained up, pose a danger to communities, including neighborhood animals. Escaped fighting dogs have killed children before anyone was able to respond. Animal shelters are now faced with a growing number of pit bulls, some of them wounded or scarred from fighting. Besides facing a litany of medical problems, these dogs are simply too aggressive to keep as pets and must be euthanized.

During a dogfighting criminal trial, rescued dogs are sometimes held by charitable organizations in animal shelters at the expense of healthy dogs, who must be euthanized in order to set aside space for the fighting dogs. These rescued fighting dogs must also be killed after the trial because they’re not safe to maintain as pets.

Because of the perceived menace of pit bulls -- which, when raised properly, aren’t dangerous animals -- it is now illegal in some communities to adopt or own a pit bull. In the next section, we’ll look at dogfighting laws and commons signs of dogfighting activity. ­