History of Pit Bulls and Dogfighting 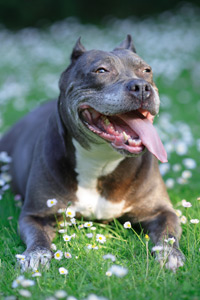 Ancient Romans pitted dogs against each other in gladiatorial contests, but dogs have also played practical roles in society. Dogs have long been used as hunting companions, defenders of property and protectors of livestock against poachers and wild animals. They play key roles in military and K-9 police units. French bulldogs and Olde Boston Bulldogges (or Old Boston Bulldogs) killed household vermin and therefore made valuable pets.

­In England, bulldogs -- frequently crossbred with terriers -- were forced to attack bulls or bears, a practice called bull-baiting that was outlawed in 1835. Following this prohibition, dogfighting developed as a distinct practice, with dogs being pitted against one another rather than bulls. By some accounts, dogfighting arrived in the United States after its development in the late 1830s and early 1840s, but others trace its history back to 1817. In any case, dogfighting was a popular form of entertainment in America until it began to fall out of public favor in the 1930s. Since then, pit bulls have become synonymous with dogfighting and violence, causing many communities to view the dogs with suspicion or to prohibit their presence entirely.

When raised and nurtured property, pit bulls are seen as loyal, gentle animals. At one time, they were nicknamed "nursemaid's dogs" because of their friendly demeanor toward children. Unfortunately, the breed's athleticism and intelligence, which would normally help its case as a good family dog, is manipulated to turn these dogs into fierce fighters. But experienced breeders still argue that pit bulls can be excellent companion dogs if they're properly trained and socialized with other dogs at a young age.

However, many pit bulls come from bloodlines where dogs were bred to maximize aggressiveness. And even with proper training and care, it is possible a pit bull may turn out overly aggressive, experts say. It's also important to keep in mind that, because they are so full of energy, pit bulls need an active life with lots of exercise.

On the next page, we'll go over some of the basics of dogfighting, including the two main types of the sport.

is a brutal form of entertainment, tracing its roots back hundreds of years. Gamecocks -- birds bred for fighting -- fight in a ring while their owners force them to wear very sharp blades or spurs on their legs. Cockfights generally don’t last as long as dogfights, but like dogfights, gambling is an integral feature of cockfights and a fight often results in the death of at least one of the birds.