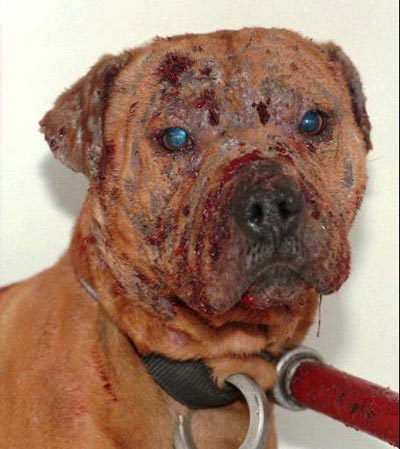 Courtesy Christopher Barth/Associated Press This dog was recovered with 21 other dogs from the property of former Houston Oilers running back Todd McNair.

There are two principal types of dogfighting: street fighting and professional dogfighting. Street fighting is less structured and serves more as a status symbol for the people who take part (frequently gang members). It’s also the area where dogfighting is growing fastest. Up to 100,000 people in the United States may be taking part in street fighting. Rival gangs pit their dogs against each other in bloody impromptu battles that take place in garages, alleys or abandoned buildings [Source: CNN].

Professional dogfighting is a highly organized subculture, made up of secretive groups where large amounts of money change hands. Professional dogfighters publish their own magazines that report the results of fights and chart lineages of successful fighting dogs. They travel widely to show off and fight their dogs. Some do it part-time, staying within the local community. Others make their living by breeding, training, fighting and gambling on the animals.

The handlers involved in professional dogfights often abide by a code of conduct called "Cajun Rules" -- a detailed list of 19 rules covering all aspects of fights, even specifying that a referee must organize a rematch if a bout is broken up by the police. The rules were created in the 1950s by G.A. “Gaboon” Trahan, a police chief in Louisiana. Some dogfighting professionals claim they treat their dogs much better than amateur dogfighters. Others say that dogfighting is an art. But brutality and illegal activity is still the basis of sport.

Like many illicit subcultures, dogfighting has its own set of code words:

These are just some of the terms used to disguise what the dogfighters are talking about. The code words also indicate that a dogfighter is part of an exclusive group. Although Web sites devoted to dogfighting may use these terms, they insist that the dogfight stories are fictional or that the site’s writers don’t condone the activity. In actuality, these disclaimers likely serve as a legal cover, preserving their ability to deny their connection to any illegal goings-on.

In the next section, we’ll take a look at how dogfighters breed and train fighting dogs.