A Dogfight, or 'The Show' 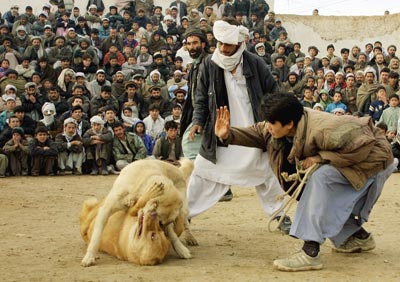 Dogfighting remains a popular spectacle in countries around the world, including Afghanistan, where this fight took place in 2001.
Courtesy Maxim Marmur/Associated Press

Dogfights take place in a variety of locations. In rural areas, it can be outdoors, in a forest or in a barn. In cities, garages and warehouses are popular sites. The two dogs fight each other in a pit or ring that’s eight to 20 feet square with two- to three-foot-high walls. A professional dogfight has a judge or referee to oversee the match.

Before the fight, handlers weigh the animals. They then wash their opponents’ dogs to make sure the animals’ coats aren’t covered with slick substances or poison. This tradition falls under Cajun Rules, which also require owners to bring towels, a blanket and to wash their dogs in the same water.

After the referee signals the beginning of the fight, owners are allowed to shout but not to physically interfere, or the fight is called. The match continues until one dog can no longer fight -- when a dog refuses to fight or jumps out of the ring, or a serious injury or death occurs. During a match, the referee will call a “turn” when a dog turns away from his opponent. The referee temporarily stops the fight while the dogs go to their handlers. The dogs are then returned to the scratch lines (starting lines) and the fight continues. Cajun Rules also specify other permissible actions during fights, such as letting handlers “unfang” their dogs (remove a dog’s lip that’s stuck on its own teeth) or provide bottled drinks for dogs, which handlers must taste to show that they haven’t been tampered with.

Dogfights can go on for hours, and by all accounts, they are gruesome events. A dogfight often results in severe injury or death for one of the animals. Many owners kill their dogs if they lose or are severely injured. Reported methods of killing, some of which were allegedly used on NFL quarterback Michael Vick’s property, include drowning, electrocution, hanging, shooting, burning or beating a dog against the ground. If they do survive a fight, dogs are often maimed or die from blood loss, dehydration or infection.

Many owners show little concern for the health of their fighting dogs. Pits and kennels inevitably end up covered in blood. Even winning dogs don’t receive proper medical care. Owners will indiscriminately give their dogs antibiotics or use crude measures like stapling shut gaping wounds. Some handlers show remarkable skill at providing improvised medical care to dogs, but their lack of formal training and disregard for the overall well-being of the animals put the dogs at great risk.

Illegal gambling is integral to dogfights. Tens of thousands -- even hundreds of thousands of dollars might be gambled on a single fight. And that's after spectators have paid to watch.

In the next section, we’ll look at the effects of dogfighting on the community.